The Quakers, a Christian group also known as the Religious Society of Friends, took an early stand against slavery. Beginning in Barbados in the 1600s, the Quaker abolitionist movement spread to South America, the Caribbean, North America, and the United Kingdom, leading to debate, discussion, and direct action from Quakers around the world. Opposing slavery on religious and moral grounds, Quakers saw the practice as abhorrently violent (Quakers are pacifists) and a violation of the way of life set out for them in the Bible. Often quoted in Quaker abolitionist history are Biblical passages such as “do unto others as you would have them do unto you” and “love your neighbor as yourself.” Quakers were at the forefront of the abolitionist movement in the United States. As early as 1688, a petition by four Quakers in Germantown, Pennsylvania objected to the practice of slavery, citing biblical arguments and providing an outline for basic humane treatment. The four signers presented the document to Philadelphia Yearly Meeting, which declined to act or make a statement; it would be another eighty-eight years before Quakers officially denounced slavery. Pennsylvania was among the first states to ban slavery due in large part to its Quaker population (DeBlasio & Haefeli). 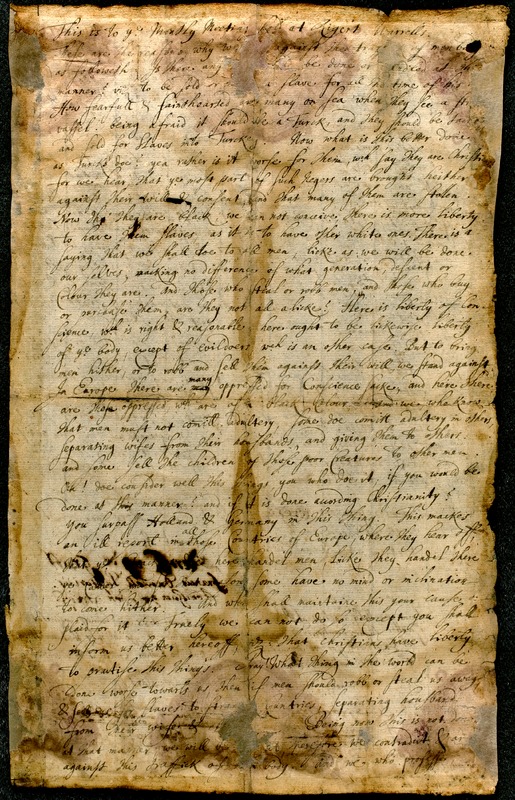 The “Germantown Protest” is a pioneering statement about human rights, abolition, and what would become the American tradition of political and ethical petitions and public speeches. The protest was read aloud in a Quaker Meeting House in Germantown, Pennsylvania, and was endorsed by four members. The protest is one example of the stands against slavery taken by Quakers, but it has a complicated story. The four signers presented the document to Philadelphia Yearly Meeting, which declined to act or make a statement; it would be another eighty-eight years before Quakers officially denounced slavery. 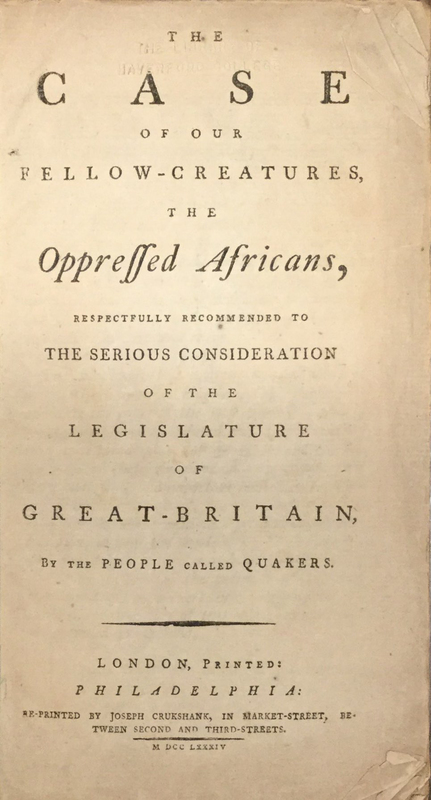 The Case of Our Fellow-Creatures, the Oppressed Africans, Respectfully Recommended to the Serious Consideration of the Legislature of Great-Britain, by the People called Quakers
London: Printed by J. Phillips, 1784

This document is an appeal written by British Quakers addressed to the British legislature. The appeal criticises the treatment of the enslaved in Britain, arguing that it is against Christian and British ideologies. The author asks readers to place themselves in the shoes of the enslaved and emphasizes the British hypocrisy of abusing the enslaved while promoting the superiority of British and Christian civilization. It is clear that the document is targeted at the legislature, as it calls for reflection on the current British laws regarding the ownership of enslaved people.