Christian theology could act as a cogent and potent moral critique of slavery. The primary theological objection raised by the abolitionist movement rested on the idea in Genesis 1.27 that “God created mankind in His own image.” This troubled Christian abolitionists because by treating slaves as lesser than others, as the poet William Cowper put it, “the natural bond / of brotherhood is sever’d,” weakening not just respect for human dignity but also adherence to the divine plan (Coffey 2-3). In this same vein, one of the most prominent abolitionist motifs—shown on the membership certificate of an abolitionist society in this exhibit—was an illustration of an enslaved person kneeling to pray and saying, “am I not a man and a brother?”

Different Christian denominations had varying degrees of concern for slavery. Many churches, especially in the American South, sought to use scripture to justify slavery, citing Biblical lines such as “you may buy slaves” and stories such as the Curse of Ham (Leviticus 25.44). On the other hand, abolitionism spread across many Evangelical denominations around the time of the American independence movement, where, according to John Coffey, they “pioneered many of the tactics of modern pressure groups” to conduct passive resistance: organizing into anti-slavery societies, condemning the practice in sermons, staging boycotts, and holding public marches (Coffey 2). 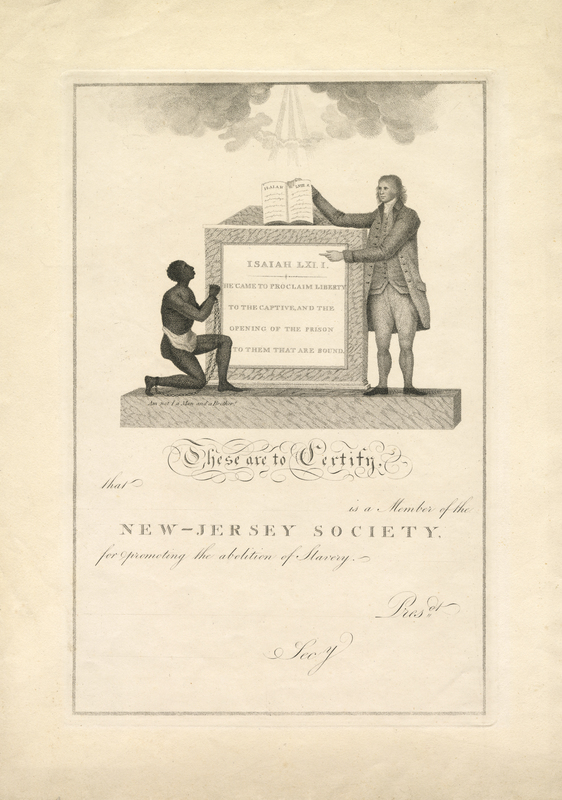 Despite being blank, this membership certificate represents an ultimately successful anti-slavery campaign. With anti-slavery sentiments rising, the New Jersey Society for Promoting the Abolition of Slavery was able to help with the passing of an 1804 act allowing enslaved children born after a certain date to earn their freedom. The certificate features the Bible verse Isaiah 61.1, which speaks about the liberation of the enslaved, thus emphasizing Biblical support for abolition. The black man kneeling before a white man and asking, “Am not I a man and a brother?” displays the skewed power dynamics between races and contributes to the widely circulating image of the “white saviour” in abolitionist rhetoric. 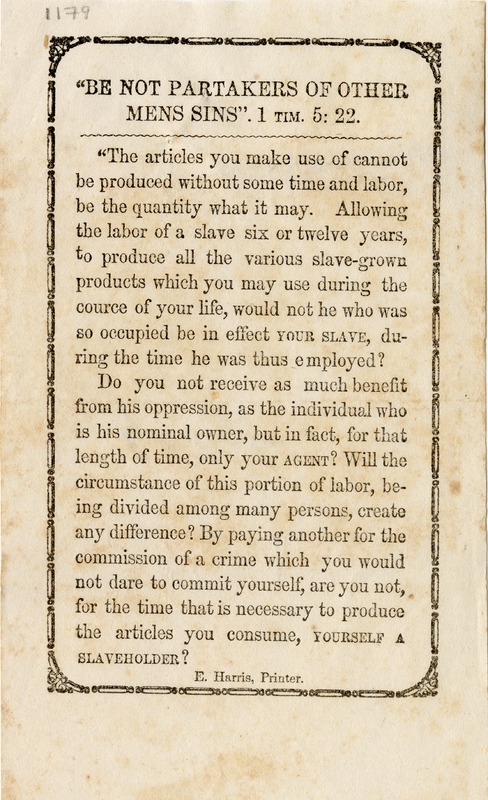 The Taylor Family papers contain multi-generational Quaker advocacy accounts spanning from 1846 to 1929. George Washington Taylor collected interesting abolitionist literature, including this pamphlet. Using Bible verses for support, this article accuses those who “[pay] another for the commission of a crime which you would not dare to commit” of being “yourself a slaveholder.” The pamphlet argues that to support the slave trade economically is to participate in the sin of human cruelty. Though probably not written by Taylor himself, this article indicates how Taylor sees his Quaker Christian morals as central to his dedication to the abolitionist cause.

← Women and Abolition
Quaker Involvement in Abolition →
Abolition and Christianity