The attempt to educate people of all ages about slavery and the abolitionist movement took various forms. Abolitionists created societies that used tactics of moral persuasion and lectures to spread their message and inform and influence their audiences about the injustice of slavery. In particular, abolitionists used the press to circulate their arguments (Jackson and Reagan). William Lloyd Garrison’s abolitionist newspaper The Liberator came out on a weekly basis, and pamphlets and leaflets containing anti-slavery poems, slogans, essays, sermons, and songs circulated widely (Carey and Plank 520). Abolitionists also published children’s books with images and text that showed the harsh reality of slavery. Some abolitionists specifically devoted their time to the education of enslaved and formerly enslaved people. This was sometimes, however, used as a way for white abolitionists to demonstrate their own generosity and underline what they saw as their superiority over African Americans. 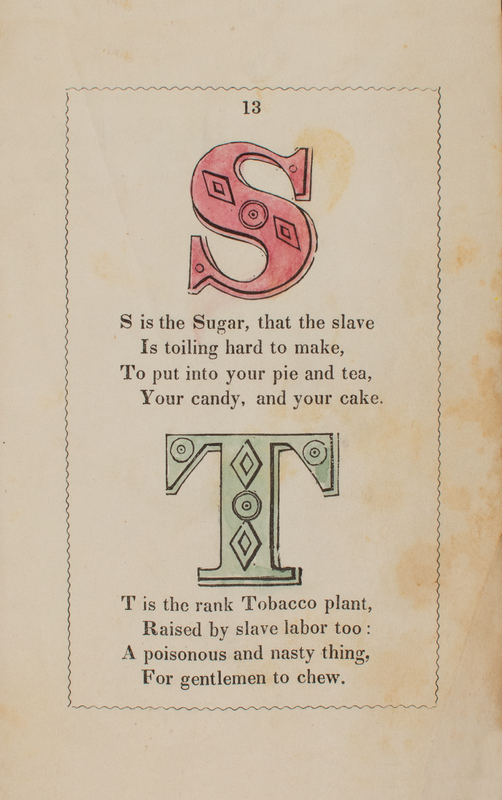 The Anti-Slavery Alphabet is an unassuming little book that contains a comprehensive children’s guide to the abolitionist movement. The opening poem informs readers that despite their age, there are ways they can actively oppose slavery. The pages that follow contain each letter of the alphabet along with rhymed lessons that span a wide area, from the definition of an abolitionist to the role whipping posts played in the punishment of enslaved people. The book features complex subject material in terms that children can understand. The weathered pages of the book serve as evidence that it was used by many people to share anti-slavery ideas. This book emphasizes the personal responsibility each person had in ending slavery, no matter their age. 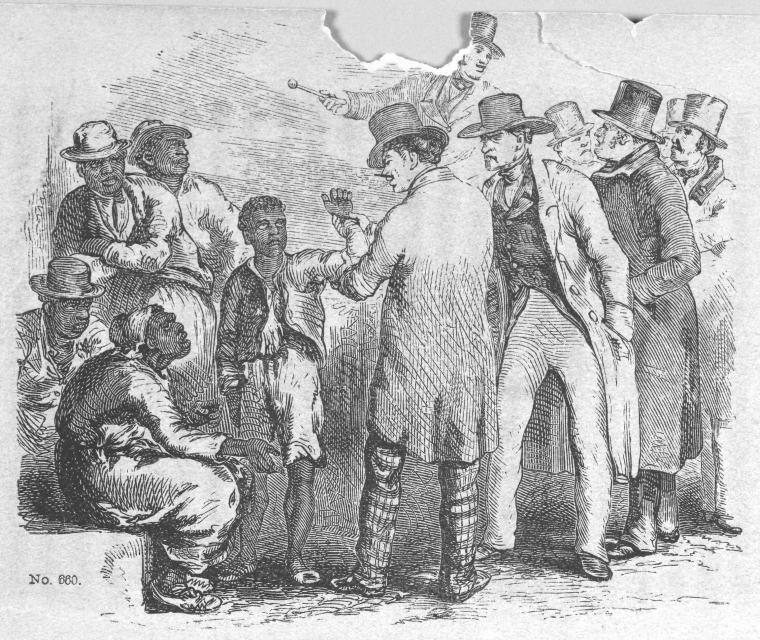 This book reminds children that not every child is free, slavery is wrong, and that they should be grateful to be free. Christianity is a theme throughout the stories, which illustrate the horrors of slavery and help the reader empathize with and relate to enslaved people. Dialogue spoken by enslaved people is written in stereotypical dialect. For example, one enslaved person expresses his will to learn to read by stating “Me neber give it up.” Given that children are the target audience of the book, the stories are surprisingly graphic when describing the emotional and physical violence enslaved people were subjected to. 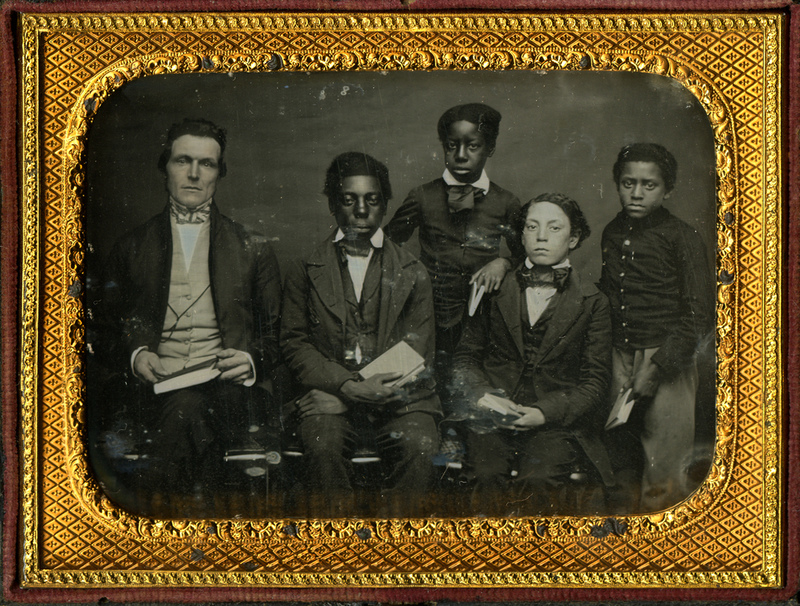 The daguerreotype was the first widely-used photographic process popular in the mid-nineteenth century. As is typical for daguerrotypes, the photo is enclosed in a case, which creates a sense of intimacy; this case is more highly adorned than most. The young men in the photograph are students in a Bible class. A handwritten note explains that this class was held at a school for Black children in Maine, while “the teachers were white people of various religious denominations who volunteered their services.” The note also lists the names and ages, ranging from eleven to nineteen, of the students. 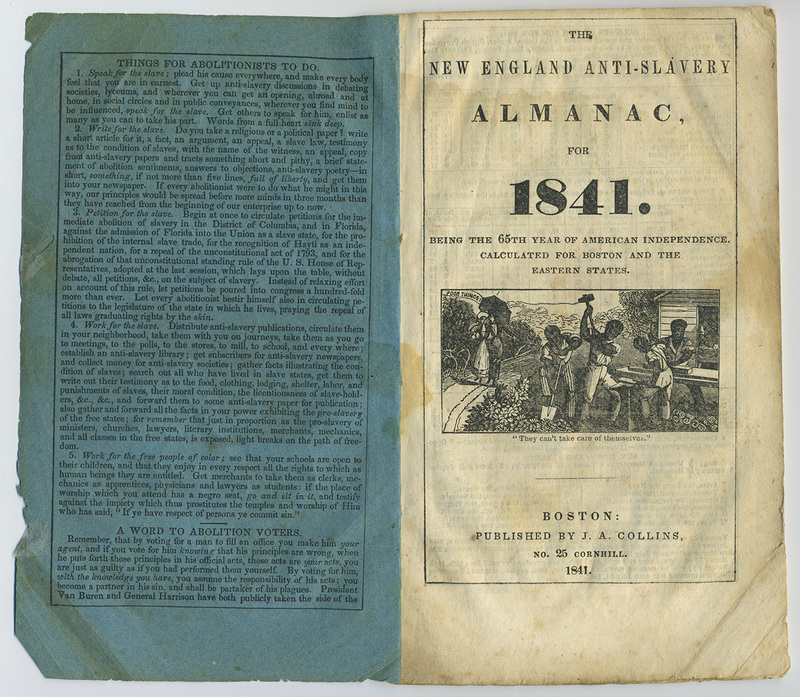 The New England Anti-Slavery Almanac for 1841
Boston: Published by J.A.Collins, 1841

While the first few pages of the almanac are comprised of tabular data common to an almanac (sun cycles, tides, length of days, etc), headers of content on the inner flyleaf, such as “Petition for the slave” and “Work for the slave,” indicate the unique idea of the rest of the almanac: its abolitionist call to action. Images depict white people acting sympathetically towards Black enslaved people.  Articles, testimonies, and poems, such as “Prejudice Against Color” and “Was God the Founder of the Negro Seat?” give examples of Black people in positions of power, condemn the behavior of pro-slavery advocates, and emphasize the benefits that emancipation had in foreign countries. 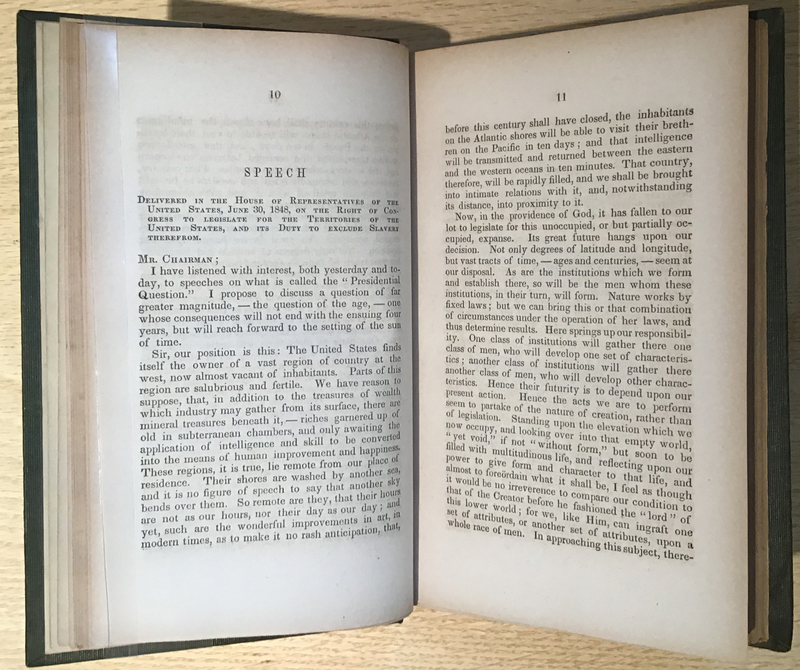 Horace Mann was a politician best known for being a strong advocate for public education. He was the secretary of the Massachusetts Board of Education, served as a member of the House of Representatives, and was an abolitionist. Dedicated to “the young men of Massachusetts,” this book intends to turn those who read it (presumably young, white, educated men in the North) sympathetic to the abolitionist cause. This book features letters and speeches that present multiple arguments against slavery. The book contains moral, religious, and legal arguments that all further the case against the existence and expansion of slavery in the United States.