Abolition and the White Savior Complex

Rhetoric among white abolitionists often focused on the heroism of white anti-slavery activists rather than enslaved people and their struggles. This focus on the salvific role of the white person in abolition is sometimes termed the “white savior complex” and was shaped by Christian language and imagery (Albrecht). It appeared in many different centuries and contexts; for example, see “The Branded Hand” anti-slavery pamphlet and the New Jersey Abolition Society membership certificate featured in this exhibit. It is important to understand that many white abolitionists were blatantly racist and that white abolitionist rhetoric often demeaned African Americans; the goal of ending the system of slavery was not equivalent to seeking equality among different races (Sinanan & Harde). 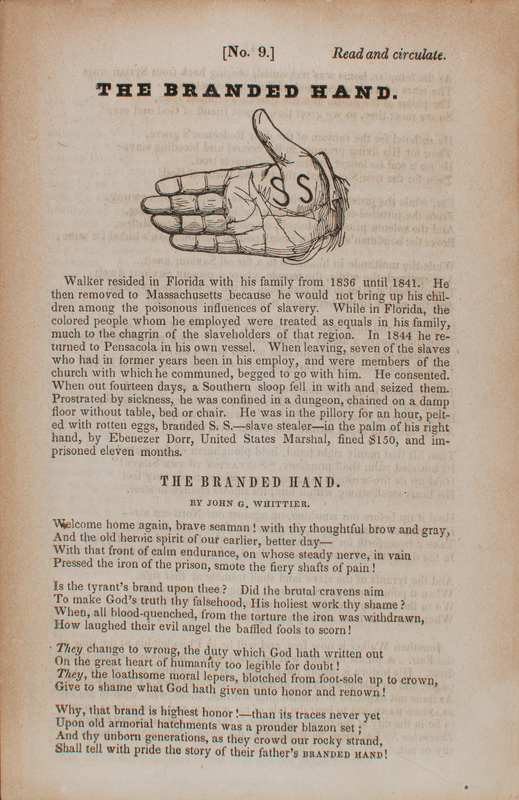 “The Branded Hand” praises a white man who was branded “S S” for “Slave Stealer.” Jonathon Walker was caught trying to free enslaved persons by bringing them back to Massachusetts from Florida. His punishment, along with the branding, included imprisonment and a fine. The poem by Quaker poet and abolitionist Whittier centers on the branding, referring to it as the “highest honor,” and praises Walker’s actions despite the stakes. An announcement that Walker is in Philadelphia calls readers to visit “to hear the tale of his wrongs and persecutions.” While ample attention is devoted to Walker’s actions, no information is given about the fate of the enslaved people he was assisting, thus contributing to the idea of the “white saviour” prevalent among white abolitionists. 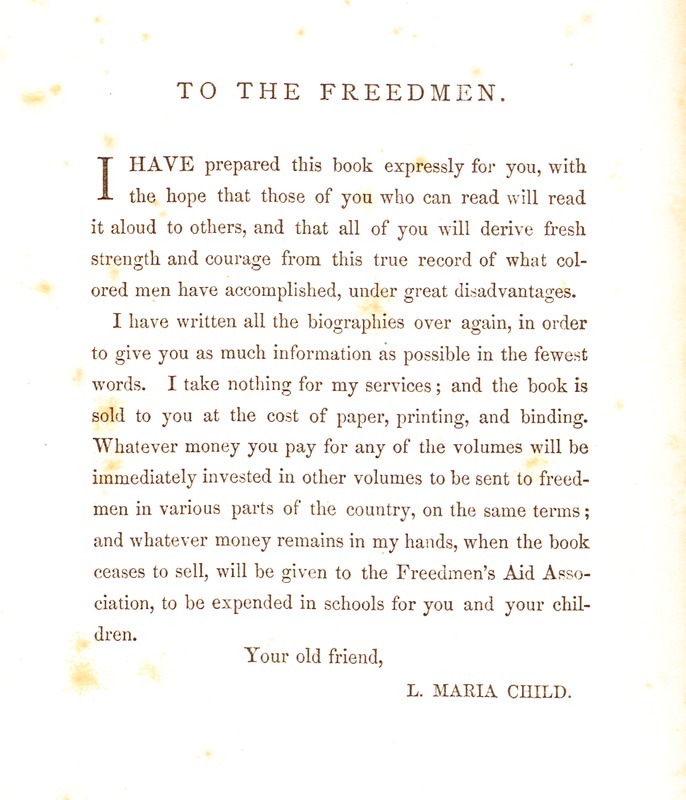 Child explains the purpose of The Freedmen’s Book by declaring that freedmen will gain “fresh strength and courage from this true record of what colored men have accomplished, under great disadvantages.” The volume includes works by prominent abolitionists and authors, both Black and white, and states that all proceeds from the book will either go to print and distribute more copies or be given to the Freedmen’s Aid Association. The book is opened to a section in which an anonymous author portrays George Washington as extremely kind to an appreciative enslaved person, epitomizing the “white savior” trope.