Wallace Stevens was born in Reading, Pennsylvania, and educated at Harvard, where he was a success on the college literary scene. After three years there he went to New York City to try working as a journalist. That job only lasted a year, but Stevens remained in New York until 1916, getting a law degree and doing legal work for various companies in the city. While visiting Reading in 1904, Stevens met Elsie Moll Kachel, whom he married in 1909. In 1916 Stevens acquired a job at the Hartford Indemnity Insurance Company, which he would keep for the rest of his life, and the couple moved to Connecticut. Stevens explored abstract and philosophical themes in his poetry and was particularly concerned with the relationship between reality and imagination. He often used complex vocabulary and word play in his poetry, and he maintained a strong interest in the natural world. 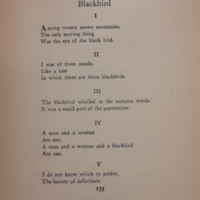 This copy of Harmonium belonged to Steven’s secretary at the time, Dorothy Hartstall. Harmonium was Stevens’s first collection of poetry, and it contains poems written during a span of almost a decade. The book includes many of Stevens’ most famous works, such as “The Emperor of Ice-Cream” and “Thirteen Ways of Looking at a Blackbird.” 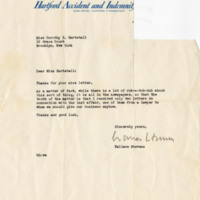 Hartstall worked as Stevens’ secretary at Hartford Accident and Indemnity Company for several years before moving to New York. For over fifty years after getting a new job, Hartstall followed Stevens’s career from afar, clipping out newspaper articles that mentioned him. Interestingly, no biography of Stevens includes mention of Hartstall. 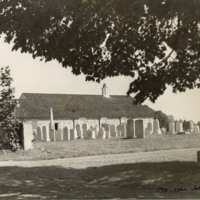 During a difficult period in his life, Stevens commissioned a genealogist and a photographer to research his family history. Stevens wrote this short pamphlet on his family’s connection to Bucks County, Pennsylvania, which stretches back to the early 18th century. Sylvia Salmi, a prominent New York photographer, photographed the church where Stevens’ relatives are buried, along with the surrounding farmlands.