Williams, Technology, and the Machine Aesthetic

In his efforts to capture everyday life in Rutherford, Williams wrote about the natural world and new technologies. As he moved between his roles as a small-town doctor and a member of the New York art scene, Williams had plenty of time to observe modernity. He wrote about the costs and the benefits of a fast-paced, mechanized society, and explored these themes in both poetry and prose. In addition to the long-term impacts of modernity, Williams applied a machine aesthetic to his own definition of a poem. He famously called it “a small (or large) machine made of words” in his collection The Wedge. 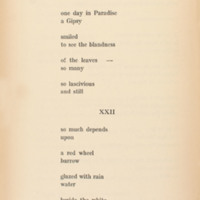 This experimental volume of poetry and prose explores the ways that the natural world coexists with new technology and man-made objects. Few people read it when it was published, but Spring and All contains some of the poems Williams is best known for, such as “The Red Wheelbarrow.” 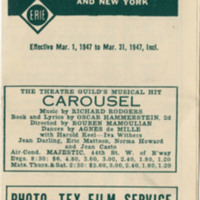 This train schedule belonged to Williams; as a poet he took train trips into the city, where he could participate in the artistic community. The transportation technology of Williams’ time was essential to his double life as a poet and a full time physician. He would even compose poems in the car as he drove to make house calls. 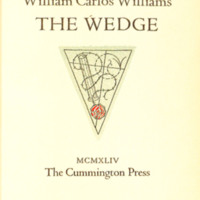 In the introduction to this collection of poems, Williams defends poetry in terms of form and utility, without giving it a fixed purpose. Writing during World War II, Williams declares that poetry is part of the war in a “different sector of the field” and describes a poem as a machine. Like a machine, a poem is efficient, dynamic, and free of extra parts. More than thirty years into his career as a poet, Williams was still arguing for the relevance of poetry in a distinctly modern and industrial society.

← Technology and Material Culture
The Natural World →
The Machine Aesthetic