Scientific developments in the late 19th and early 20th century, especially in physics and chemistry, had a significant impact on Stevens and Williams. Albert Einstein’s theories of relativity, the developing field of quantum mechanics, and the discovery of radium by Marie Curie all called into question the prevailing understanding of reality itself. As Lisa Steinman has argued, these new scientific ideas were adopted and used by poets in an effort to gain legitimacy in American society. Williams and Stevens were both familiar with the scientific discoveries of their time, and they used that knowledge to shape the content and form of their work. 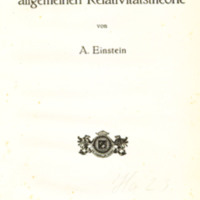 General relativity built on Einstein’s earlier special theory of relativity, and offered a new theory of gravity that integrated that of Isaac Newton. Rather than defining gravity as a force, Einstein defined it as spacetime curvature. The mass-energy of the sun, for example, actually warps spacetime, producing a gravitational field. After Einstein’s theories were confirmed, he became a folk hero in the United States, and many writers adopted his ideas for their own purposes.