The Changing World of Print and Publishing

In the late 19th century, the final steps in printing were mechanized, and the use of cheaper, wood-pulp paper made publishing books and magazines more affordable. A multitude of small presses pushed back against larger cultural movements for efficiency and carved out spaces for modernist poetry. Williams and Stevens both published limited-edition and signed works with small publishers such as Alcestis Press and Cummington Press. Ronald Lane Latimer, the elusive founder of Alcestis, was a particularly supportive advocate of Stevens and Williams during the Great Depression. Technological and cultural changes also allowed for the rise of little magazines such as Others and Poetry, which published Stevens and Williams and helped drive the modernist movement as a whole. 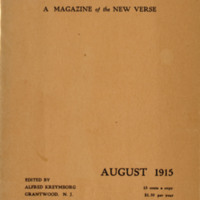 This issue of Others contains work by both Stevens and Williams. Others was a particularly influential modernist little magazine started by Alfred Kreymborg in 1915, and it featured work by talented poets such as Mina Loy, Marianne Moore, and Carl Sandburg. Williams had a close relationship with Kreymborg and was involved with Others beginning at its foundation. 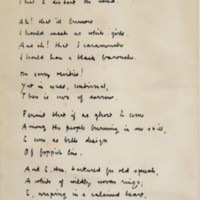 This poem was handwritten and signed by Stevens in a March 12th, 1935, letter to Ronald Lane Latimer. Latimer himself had asked for the manuscript and provided the paper, which he notes on the reverse. In the same letter, Stevens enclosed “Sailing After Lunch” and proposed the title Ideas of Order for his next collection. 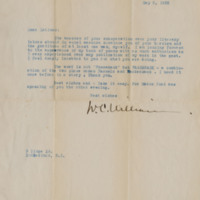 Williams wrote this letter to Ronald Lane Latimer, founder of Alcestis Press, who published two of his books and was at one point meant to be his permanent publisher. Williams was clearly very grateful to Latimer, who was publishing his (and Stevens’s) poetry during the Depression, a time when doing so was especially difficult. 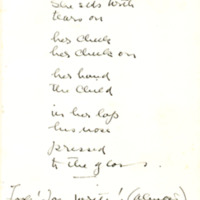 The small Alcestis Press published this book of Williams’ poems, and the present copy was owned by Latimer himself. Williams inscribed a poem, “Young Woman at a Window,” along with the words, “Fools! I can write (almost)” and then his name. Many of Latimer’s copies of books from Williams and Stevens are inscribed with their poetry or handwritten notes. 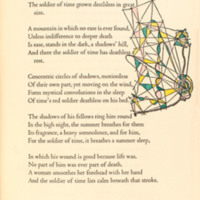 This standalone poem by Stevens, which explores good and evil, was printed on a hand press by Cummington Press. The abstract illustrations, which one reviewer described as “marginal doodlings of his Satanic Majesty,” are by Wightman Williams. Both author and artist waived their royalty fees so Cummington Press could afford to use high-quality paper.