Stevens, Technology, and the Natural World

Stevens also experienced the technological advancements of modernity, but he was less inclined to directly discuss them in his poetry. He maintained a strong interest in the natural world and the imagination, often omitting characteristics of contemporary American life. Stevens was sometimes criticized for a lack of engagement with modernity, and in the 1930s, a desire to respond to this criticism shaped his subject matter in The Man with the Blue Guitar. Whereas much of his poetry avoids direct mention of modern technology and society, the aforementioned collection is an exception. Stevens ultimately viewed the poet’s ability to resist “the pressure of reality” as vitally important. For Stevens, nature was a source of great imaginative power, while the pace and problems of modern life exerted a significant pressure on the poet. 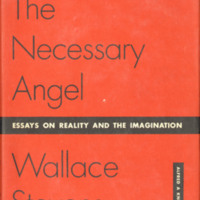 In this essay, Stevens explains the role of poetry and the poet in modern society. Stevens speaks of the spiritually and physically violent “pressure of reality” during a time of war and upheaval. A poet is someone capable of resisting this spiritual pressure, and their role is to share their imagination with others and “help people live their lives.” 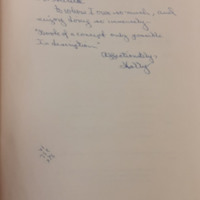 This enormous volume of Stevens’s letters and journal entries attests to his early interests in botany and the natural world, as well as his conflicted feelings about modernity. This long and convoluted entry written at age nineteen reveals the young Stevens’ struggles to make sense of modernity and his future, as well as his deep and careful observation of the natural world. 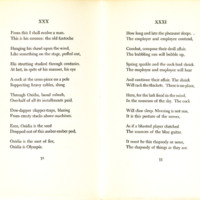 During the 1930s, Stevens was struggling with critical responses to his poetry that deemed it too distanced from the modern world. These poems reveal Stevens’ attempts to reconcile modern suburban life–– its telephone poles and pensioners–– with his imaginative impulses. Stevens’ efforts to balance reality and imagination were a defining feature of his poetic career.

← The Machine Aesthetic
Print and Publishing →
The Natural World