The presence of science in Stevens’ poetry is often subtle, but the analytical quality of many of his poems reveals an inherently scientific perspective. Stevens begins poems by presenting a possible scenario, which he then builds upon and explores. Jeffrey Blevins argues that this practice resembles the “thought experiment” in science, a technique famously used by Einstein himself. The content of Stevens’ poetry also has connections to quantum theory. One common theme in Stevens’ poetry–– that imagination and creativity literally shape the experience of reality–– has parallels in the behavior of particles at the quantum level. Experiments have shown that the mere act of observing a particle changes its path; thus, creative observation could easily do the same. 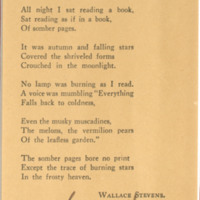 The New Republic, which published this poem, was a more well-known magazine than many of the places Stevens had previously published. Critics such as Judith McDaniel have noted a connection between this poem’s fall into “coldness” and Newton's second law of thermodynamics, which deals with entropy. The language also evokes the changing of the seasons and the process of aging and death. 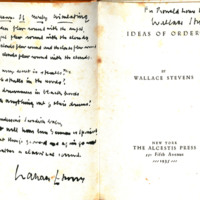 Dana Wilde has noted that many of Stevens’ poems, including “The Idea of Order at Key West,” explore concepts which have analogues in the field of quantum physics. In this poem, the singer shapes reality through her act of creativity. Intentionally or not, this interaction between the mind and the physical world parallels the idea of complementarity in quantum mechanics. 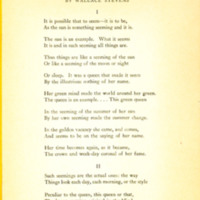 This complex poem explores the way our perception of reality is mostly constructed in the mind–– as a way of ordering sensory experience. This perception thus has the power to influence the world around us. Once again, Stevens’s ideas parallel the thought of physicists at the time regarding the nature of reality.