Williams was more than happy to adopt scientific language and concepts for his own poetic purposes. As early as 1923 he stated that “the imagination uses the phraseology of science. It attacks, stirs, animates, is radio-active.” Williams clearly saw a link between the  dynamic qualities of science and the imagination required to write poetry. Throughout his poetic career, Williams would explore many new scientific ideas, utilizing them for metaphors and even structural innovations in poetry. He was particularly interested in Marie Curie and radioactivity, as well as Einstein and the implications of his theory of relativity. In Lisa Steinman’s view, identification with figures like Einstein offered Williams credibility in  a society where science was valued over the arts. 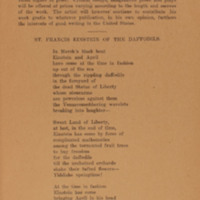 This poem celebrates the arrival of Albert Einstein in the United States. The speaker identifies Einstein with spring and freedom, and describes his arrival in the United States beneath the “dead” Statue of Liberty. Einstein is simultaneously a saintlike, nurturing figure and a “wise mathematician,” coming to liberate science from its old paradigms. 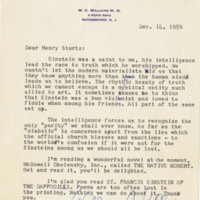 More than thirty years after publishing his poem about Einstein, Williams received a fan letter, to which he responds enthusiastically here. The “materialists” he criticizes are the scientists who saw the world as consisting of separate, inert bits of matter, acted on by external laws–– compared to Einstein’s reciprocal and subjective theory of relativity. 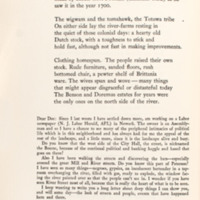 Paterson is Williams’s five part epic which he centers on the New Jersey city of Paterson. The central figure is a doctor-poet also named Paterson, and in Book Four Williams compares him to Marie Curie, the French scientist who discovered radium in 1898. Carol Donley notes the connection made between Curie’s search for the radioactive material and Paterson’s search for meaningful language. 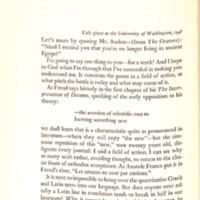 This particular speech was given in 1948 to students at the University of Washington. Williams declares the need for a new structure in poems, one that is distinctly American, and references both chemistry and physics. He especially focuses on relativity, saying that it “applies to everything, like love, if it applies to anything in the world.”