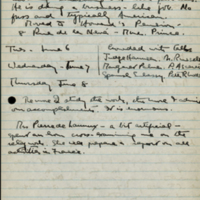 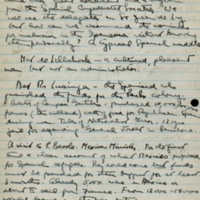 In his capacity as public relations director and relief administrator for the American Friends Service Committee (AFSC), John F. Rich traveled to Spain in 1939 to wind down the AFSC’s refugee and child feeding relief facilities. During the trip, Rich recorded images of the bucolic countryside, juxtaposing it with the destruction of the Civil War. The diaries also include personal musings on his sadness at seeing the refugee children, work-related to-do lists, and first drafts of AFSC memos. Here, one can see Rich’s thoughts on what Quakers can do “to Make Nations Friendly to Spain”; he suggests that Quakers should use their “connections in high places” and publicly endorse Spain’s desire for diplomatic contact with North America. This action entails political involvement, and to an extent, taking sides. Hence, Rich’s suggestion that Quakers attempt to influence international politics even after the conflict has ended in this manner is contrary to some Friends’, such as relief worker Howard Kershner’s, belief that in order to impart effective relief, neutrality is essential. Rich and Kershner’s conflicting views towards political intervention represent contemporary debate within the greater Quaker community about the place of politics in relief work.