The Quaker Peace Testimony and the Spanish Civil War

A transnational movement of pacifist activists that included the Quakers, artists, writers, public intellectuals, and relief workers organized to help the people under attack in Spain and to relieve the effects of war. At the heart of this movement was the Quaker peace testimony, a spiritual witness to the importance of every individual life. Historically, the peace testimony is based on the Quaker belief in the Inner Light—that there is that of good, or that of God, in every person. Caroline Emelia Stephen, Virginia Woolf’s Quaker mystic aunt, explains this principle in her book Light Arising, writing that “there is given to every human being a measure, or germ, of something of an illuminating nature—something of which the early Friends often spoke as ‘a seed of life’—a measure of that ‘light, life spirit and grace of Christ’ which they recognized as the gift of God to all men.” For the Quakers, that “seed of life,” or “measure of ‘light’,” exists in one as it exists in all; therefore, they uphold that it is a duty to preserve and encourage the light to flourish in everyone. According to Quaker thought, the preservation and fostering of the Light requires lived actions; Friends feel that they must enact and manifest in their daily life what they believe.10 Therefore, the Quakers responded to total war in Spain by distributing goods, food, and clothes for civilians on the ground regardless of political affiliation. In order to raise funds for this mission, the Friends worked with many international organizations, collaborating with a large network of concerned citizens that included many famous modernist artists and authors.

As Farah Mendlesohn discusses in her book Quaker Relief Work in the Spanish Civil War, social justice had become an increasingly important element to the Quaker peace testimony, starting in the late nineteenth century and 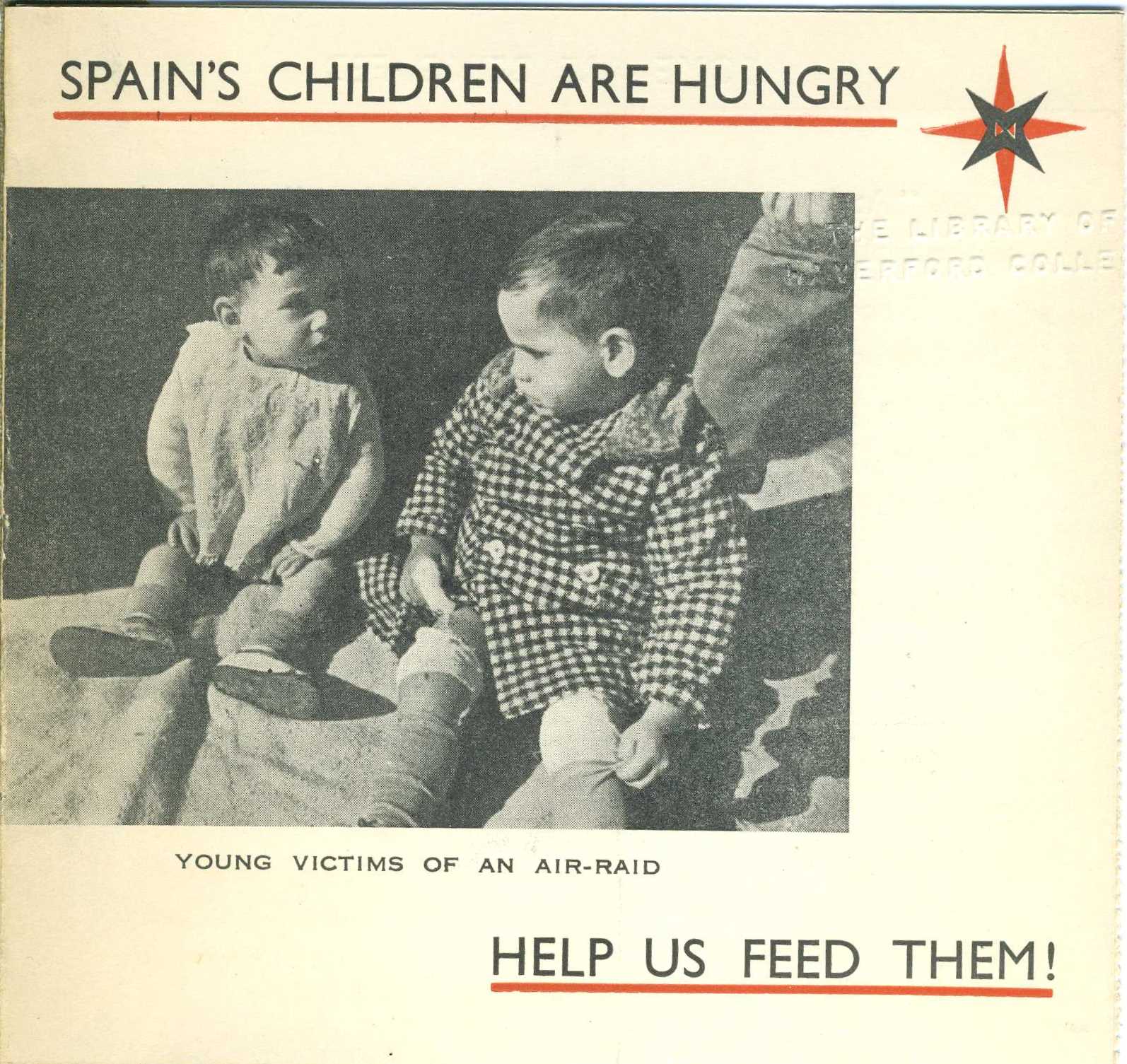 Spain’s Children are Hungry. London: Friends Service Council, date unknown. This fundraising pamphlet includes a card to be returned with a donation.

through the modernist era. An integral part of pacifism merging with social justice is what the field of Peace Studies would now call “positive peace,” the belief that one must intentionally build peace. Quaker pacifists during the Spanish Civil War felt that they needed to actively create the conditions for peace, and they worked on the front lines in Spain to help preserve life and live as models for peacebuilding. The Quakers believed that educating children, distributing food and clothes, and assisting in the relief of hunger and suffering would create international goodwill and help to spread a pacifist message through a conflict-wrought, war-torn country. Alfred Jacob, the British Friends’ representative in Barcelona, wrote in a letter from Catalonia, “Our effort is simply to do the works of peace in the midst of war, affirming the rights of human personality which war denies. It is all that lovers of peace can do at a time like this.”11 For Jacob, and many Quakers, the only response to total war was to try to alleviate its effects in any way possible. At the end of the war another Quaker, John Rich (Haverford ‘24), who coordinated relief in Spain for the American Friends Service Committee, wrote in his diary: “I am glad to have been involved in this Spanish War and to have contributed something to its pacification. If I died today I at least could say I’ve done something worthwhile,”12 showing the importance that Quakers attributed to relief work in Spain. The relief workers addressed not only the physical, but also the psychological needs of the people, particularly children, by enlisting them in a network of care that reminded them that, ultimately, they were still human.13