Letter from Lucille H Stevens to Daniel and Elizabeth Jensen 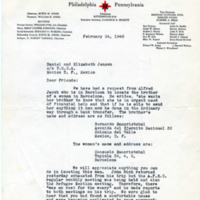 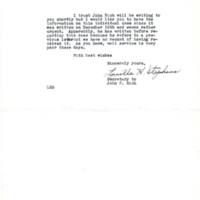 Letter from Lucille H Stevens to Daniel and Elizabeth Jensen

During the Spanish Civil War and for several years after, international relief efforts were coordinated between various Quaker and non-Quaker organizations, in the hope that the refugees and displaced peoples from the conflict could receive direct aid. Sometimes, the route to aid extended through other countries, as is specified in this letter from the American Friends’ Service Committee to representatives of the YMCA in Mexico City, on behalf of Alfred Jacob in Spain. The state of total war that had taken place within Spain led to extraordinarily high rates of hunger, poverty, and displacement, some of the conditions which no doubt led to the AFSC’s request to locate a Spanish refugee’s family member. The Quaker relief effort, encapsulated here in the plea to reunite a family, was guided by the belief in service and aid. Quakers not only fed the hungry and displaced within Spain, they also coordinated relief efforts beyond these into France and Mexico.