In the 1930s, many progressive movements that promoted a concern for social justice and human rights, for racial and gender equality, and for world peace,3 were passionately working towards global freedom and elevation of “the rights of all.”4 In contrast, a rising fascist movement attempted to violently hurtle itself into the future by capitalizing on public nostalgia for a lost past, a golden age of empire and dominance. In Spain, the tensions of the era erupted on 17–18 July, 1936, when a group of generals, supported by the majority of the military, the Catholic Church, and the wealthy landowners, attempted to overthrow the democraticallyelected, progressive Republican government. Eventually led by General Francisco Franco, the insurgents espoused a far-right, fascist political platform. The people of Spain formed workers’ militias and resisted the insurgent military, fending off the coup d’état long enough for international support, including Russian reinforcements and thousands of people from around the world, to arrive. These International Brigades were a global grassroots movement that volunteered on the front lines in Spain to fight fascism. 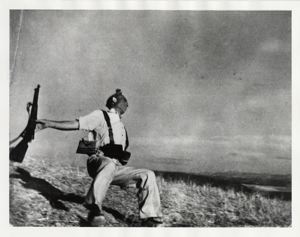 Germany and Italy, led by Adolf Hitler and Benito Mussolini, almost immediately supported the Francoists, providing air power and tanks to the insurgents. With Russia involved in defense of the Republic, Spain quickly became an international battleground where global tensions between the left and the right played out on Spanish soil. Ernest Hemingway famously described the struggle in Spain as “the dress rehearsal for the inevitable European war.”5 However, despite the transnationalnature of the conflict, Great Britain, France, and the United States maintained a policy of neutrality. The international, intellectual left protested the war in Spain, the rise of fascism, and the failure of three world powers to intervene, while the right supported the insurgents in Spain, who saw themselves as engaged in a modern “crusade,” saving civilization from the godlessness of an increasingly secular society.6

What started as a coup d’état erupted into a threeyear total war that escalated into unprecedented violence.7 Various factions of the left, including anarchist, communist, socialist, democratic, and Republican parties, in a mass-movement of rage and collective paranoia, retaliated against centuries of oppression, starvation, and disenfranchisement by violently targeting priests and anyone suspected of being a collaborator in the coup.8 Franco’s forces, with the help of Hitler and Mussolini, unleashed a sustained aerial attack against civilians that inspired world outrage. The repeated bombings of Madrid, the destruction of Guernica, and the attacks against Valencia and Almeria turned the cities into a battlefront.9 These aerial attacks, and the mounting civilian deaths, sounded an ethical call throughout the world, demanding that concerned citizens react and intervene. In spite of a progressively militarizing cultural climate, as Testimonies in Art & Action reveals, there were a number of people who responded to this ethical call through pacifist means, thus Igniting Pacifism in the Face of Total War.