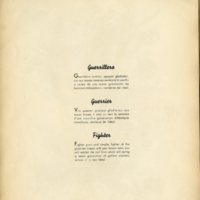 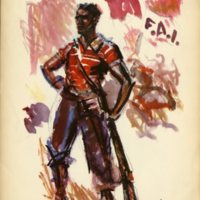 This painting from Estampas de la Revolución Española promotes a false sense of heroism established by society, a sense of heroism that traps humanity in a closed cycle of victims. It depicts a stern-faced man; clad in rolled pant legs and a polo with his hands squarely on his hips, shoulders back, head held high, and rifle at his side, he is the new Achilles. He is the hero whom young men revere and attempt to emulate. He is viewed as a figure of strength and bravery. However, in actuality, he personifies the Achilles’ heel of society: its tendency to exalt war. He exemplifies a war-glorifying system that has bound the minds of people. The paintings presented in this book by the Propaganda Offices of the CNT-FIA engenders positive feelings toward the cause of the Spanish people in fighting against the Fascist insurgents in Spain; it emphasizes the vivacious humanity of the Spaniards through endearing narratives and colorful imagery. Paradoxically, this painting screams for freedom in tones of war.