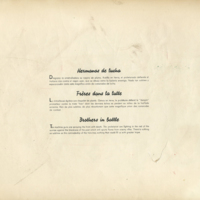 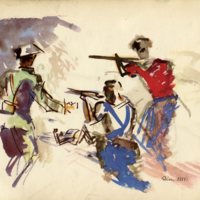 The artistic depiction of a helpless figure being persecuted is ubiquitous in times of Spanish agony. This is evident in both the Offices of Propaganda of the National Confederation of Workers’ “Estampas de la Revolución de Española” and Goya’s “Third of May”. The Offices of Propaganda of the CNT and the FAI created this book of stamps to bring color and glory to the war. While Goya’s work depicts a submissive Spanish man during Napoleon’s invasion of Madrid in 1808, the stamp takes an antithetical approach to the subject by casting the shooters in the foreground in a virtuous light. Unlike Goya’s emphasis on humanity, the “Brothers in Battle” stamp romanticizes inhumanity by depicting the death of a powerless man as an epic aspect of war. The stamp artist accomplishes this by painting two distinct, colorful shooters in the foreground and concealing the identity of the defenseless nationalist by facing him away from the viewer. While Goya commiserates with the innocent, surrendered man, the stamp artist celebrates his death as an act of “comradeship” among Republicans. Thus, these two pieces with similar subject matter present opposing perspectives that shed light on the multifaceted experience of war.