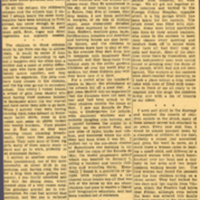 The bombings during the Spanish Civil War not only destroyed buildings and land, but they destroyed families. Children of all ages were victims of fascist attacks, and because of the numerous children who were left orphaned and who were in harms way of future bombardments and starvation, children’s colonies were created to provide them a place of refuge during the war. In this newspaper clipping Diana Forbes Robertson, the wife of journalist Vincent Sheean, writes of her time in Spain. This clipping was found in a folder titled L. Hollingsworth Woods Papers, in which there were many miscellaneous documents and letters either written by Woods himself or documents that referenced the Spanish Civil War. Woods was a co-founder of the American Friends Service Committee, which was a Quaker organization that worked to help the refugees and victims of the fascist attacks during the civil war. While the exact date of publication and the newspaper from which this article by Diana Robertson came from is unclear, based on evidence found in the article, along with a second newspaper article written by Robertson that can be found in the same folder, it can be inferred that the article was written around April of 1938 and that it was originally published in the Chicago Tribune. This article depicts several colonies in which children are hungry; yet their lives must continue as they “attend school, get their hair cut, and dance ballet.” In this piece Robertson provides an outsider’s perspective of the lives of child refugees during the Spanish Civil War.