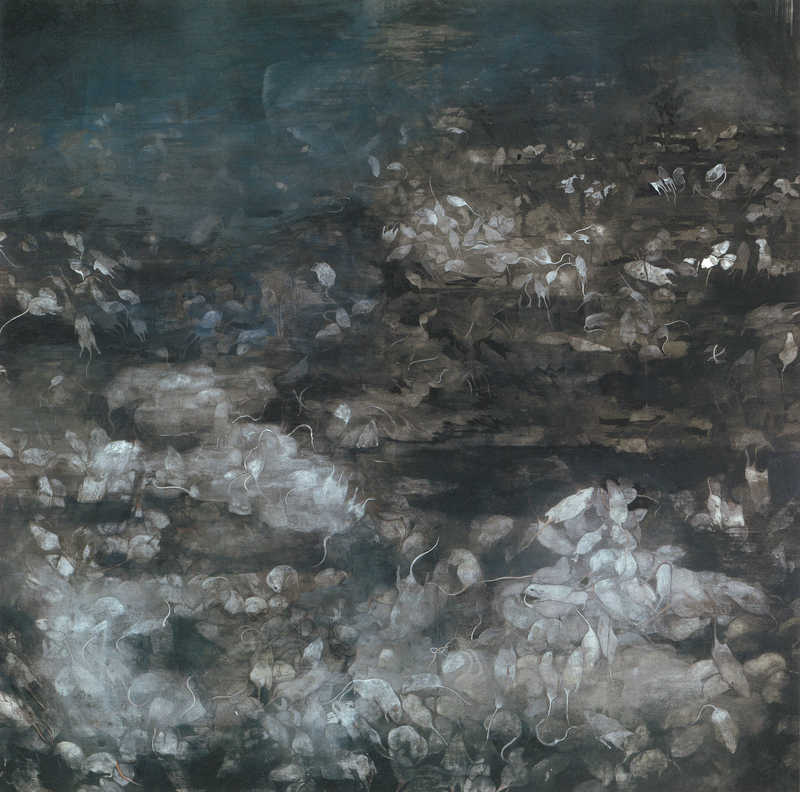 Matsui Fuyuko, Necessary Things for Achieving an Effective Resurrection in a Short Period of Time (2003)

Although Matsui is known best for her depictions of women and the supernatural, much less attention has been placed on Matsui's elegant yet haunting landscapes and ethereal depictions of fauna. These flowers and landscapes create an important dialogue with past works of nihonga which also follow a similar style, yet deviate in ways unique to Matsui's overall personal style of sketching and painting. The landscapes also usually correspond to larger themes related to pain and suffering, such as in the interactive neatline exhibit below, Becoming Friends with All the Children in the World (2004) which is based on the famous suicide forest in Japan, Aoikigahara.

In regards to the above painting, Necessary Things for Achieving an Effective Resurrection in a Short Period of Time, Matsui has stated the following:

"I have portrayed the tragedy of lemmings commiting mass suicide by drowning in a lake. In a certain country, lemmings come down from theforests in large groups every few years. Compelled by an irrestible urge, they press forward, overcoming every obstacle in their path without fear so as to kill themselves by leaping into the sea. An ultra self-destructive behavior caused by a kind of mass hysteria."1

Suicide, madness, and hysteria. What at first glance appeared to be animals floating in water in an image reminiscent of water lilies or cherry blossom petals floating on a lake is immediately twisted, depicting a gaping wound of trauma and despair. The muted coloring of the lake blends and contrasts against the white, luminescent depictions of the lemmings' corpses. Yet in spite of that horrific tragedy the painting displays, there is still a sense of disassociation between the viewer and the painting, as if the surface beauty of the image depicted prevents a total response of abjection and breakdown once the eyes have had time to absorb the ugly, twisted meaning that is always lying in wait beneath. 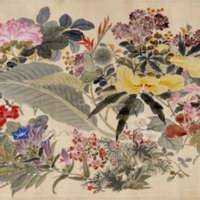 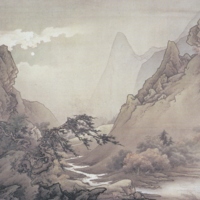 The above images are traditional examples of nihonga depictions of flowers and landscapes. Note the bright, colorful flowers present in Tanomura's painting in contrast with the dying or transparent ghost-like quality of those of Matsui's. In addition, both paintings resist providing a narrative story, remaining simple snapshot depictions that reference older styles of Japanese art. 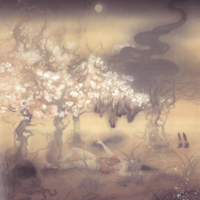 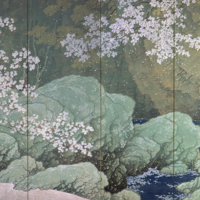 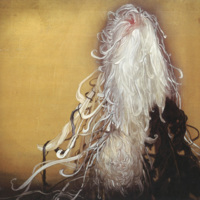 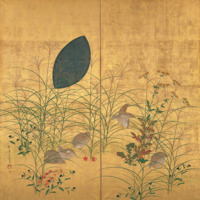 In all of her works, Matsui takes the concept of "beauty" that nihonga is so lauded for and perverts it, creating an image that while at first seemingly beautiful soon reveals the ugly traumatic event lying beneath it. The following four images have been carefully selected and isolated in order to show the juxtaposition between Matsui's work and older works in the Japanese art canon, highlighting the ways Matsui’s works are in conversation with their predecessors, yet simultaneously taking traditional nationalistic themes in Japanese art and both subverting and perverting them stylistically and thematically.

Compare, for example, Matsui's Mourning of the Promenade (2010) against Kawai's Parting Spring (1916). At first, both images share remarkable similarities, each depicting the classically beautiful motif of cherry blossom petals scattering in the wind. Yet whereas Kawai’s work is attempting to revive new ways of approaching classical depictions of decorative Japanese art (bringing back motifs and styles found heavily in yamato-e),2 and therefore creating an implicit political message of what styles and themes of Japanese art (and by extension, society) viewers should find most important, Matsui is directly challenging this notion. Unlike Kawai’s painting, her cherry blossoms are not falling over a peaceful river but a strewn-out female corpse, subverting the traditional nationalistic imagery of women attending cherry blossom viewing parties that were so common in depictions of bijinga, or art about beautiful women. What at first appears to be two very similar paintings abruptly diverges in style and meaning; one remains a nostalgic attempt to memorialize the “best of Japanese” art through depictions of images and art movements strongly associated with the nation-state of “Japan”; the other depicts wispy and gnarled cherry blossom trees that fade into the background of the painting as their petals draw the viewer’s eye to the corpse they skirt around, a long surgical incision running the length of her stomach and overflowing with spilling organs and guts that fall to the ground in a mirror of the flower petals surrounding them. For Matsui to go so far as to pervert and infuse depictions of flowers, birds, and nature - all classically nationalistic motifs in Japanese painting and especially in nihonga3 - with images of decaying female bodies and wispy trees, Matsui is challenging the value system of what (and who) is considered “beautiful” in Japanese art while still utilizing the pigments and techniques that make her work nihonga.

The next section, anatomical dissections, will take a closer look at how Matsui depicts surgically precise incisions and warped anatomy on other female subjects in her work, as well as examine the role of Western-style anatomical sketches and paintings in her art. 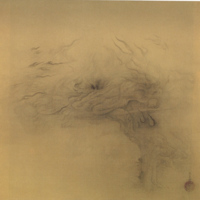 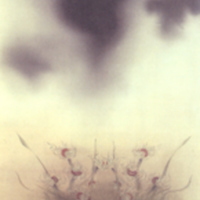 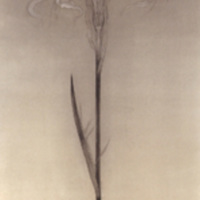 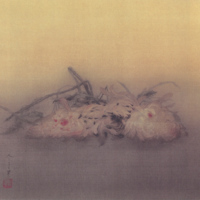 ← Conversation with the Past
Anatomical Dissections →
Flowers & Landscapes