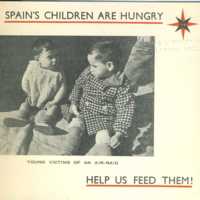 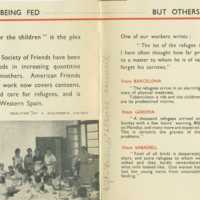 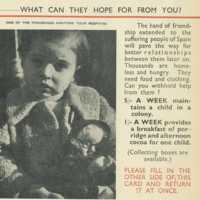 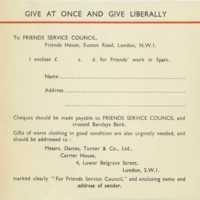 This is one of the donation cards that were distributed by the Society of Friends. It is titled “Spain’s Children Are Hungry: Help Us Feed Them.” The card is folded into three, each section conveying a different message from the other. The first part of the folding, once you open it, focuses on the work that Quakers have been able to do. This include setting up of canteens and temporary hospitals and distributing milk and food to children and nursing mothers. The second section focuses more on those who are still in need. It describes a number of challenges that are still being experienced in the camps which include the increasing number of refugees, lack of enough food, children suffering from malnutrition, and lack of blankets and diseases. It is because of all the ongoing challenges that the Society of Friends still needs funds. This leads to the third section of the card requesting for donations to help feed the children who happen to be the most vulnerable in the camp and also to cater for the other people’s needs. A photo of one of the children in the camps is printed on the same side, a sad, young girl carrying a doll. On the side of the photo is a statement, ‘The hand of friendship that you stretch to the suffering people of Spain will create a better relationship between them later on.” It is clear that the card not only served to request donations but also to show the effect of the war on the children of Spain and what can still be done to save the situation. This naturally draws a lot of sympathy from the reader and would help them to be more willing to support those in the refugee camps in any way possible.