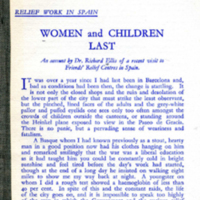 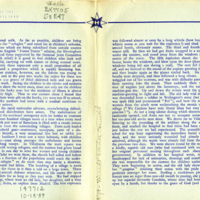 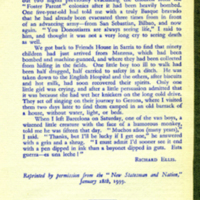 The Spanish Civil War marked a new period of modern warfare, as we can see through observing the pamphlets that were used to spread awareness of the war and the actions the Quakers were taking to aid those suffering. This pamphlet, written by Dr. Richard Ellis, focuses on the everyday influence of war on Spanish society. This reading speaks to the notion of total war, a concept addressed by Paul Saint-Amour in Tense Future. His work is mainly concerned with exploring the definition of total war as war affecting “political, economic, and cultural domains.” Extending upon the purview outlined by Saint-Amour, the pamphlets are able to speak to the mentality of civilians once such merciless war had become the standard of life. Specifically, Dr. Ellis retells the comments of a refugee he had encountered. The refugee said that “the war... taught him you could be constantly cold in bright sunshine and feel tired before the day’s work had started.” His remarks highlight that the totality of war affected normal routines for extended periods of time, thereby extending and reshaping our understanding of absolute warfare. This is crucial to explore because for those lucky enough to live, total war wasn’t one passing moment of panic, but rather, in the case of Spain, three years of heavy mental and physical deterioration.