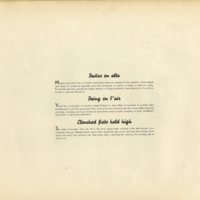 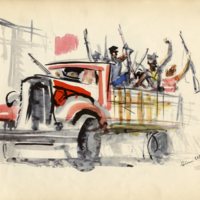 Republican Spain published many propaganda items during the Spanish Civil War in order to promote their cause. This piece, “Clenched Fists Held High,” is part of a book of stamps published by the anarchist Office of Propaganda. This image represents the war as a glorious fight for social justice, motivating readers to support the fight against fascism. Its use of blurred, but colorful visuals portray the war as active and positive. The caption, which uses socialist rhetoric like “comrades” to illustrate the valiance and brotherhood of those fighting, demonstrates the goals of social justice and equality which motivated the war. All the captions in the book are printed in Spanish, English, and French, indicating that the government intended for it to be read abroad in order to encourage neutral foreign powers to join the side of of the Republic. Unlike many other materials in this exhibit, this piece is unique in its portrayal of violent means as effective.