New Identities of the City

Burning almost one half of Tokyo, The Great Kanto Earthquake relocated citizens to less damaged areas in the city.

The vast relocation changed the demographics of each district in Tokyo, and thus transformed their distinctive features.
According to Goto Shimpei’s reconstruction plan and people’s new needs, individual regions in Tokyo transformed their identities to a temporal shelter of the homeless, a residential quarter, or shopping or industrious centers.
In the One Hundred New Views of Tokyo, Creative Print artists depicted the new identities of some regions through landscapes.
However, they did not only paint the physical recovery and transformations of the city in the late 1920s and the early 1930s. But also, they showed the qualities of lives of people living in or visiting the regions.
Many of the regions’ unique features defined by the reconstruction processes at the time are preserved until today. 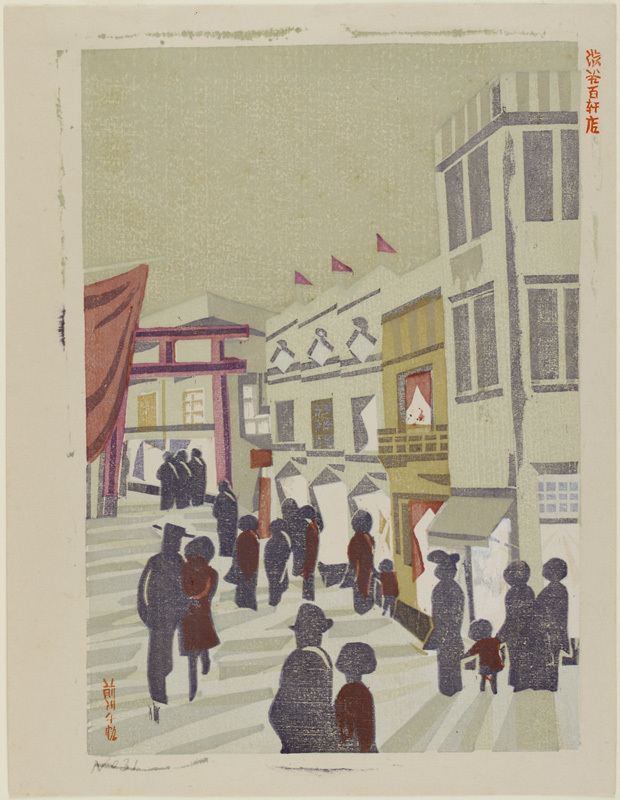 Aimed at creating the space like an outside department store, Shibuya Hyakkendana, a small shopping district, built as part of the Tokyo reconstruction plan in 1923.  A red tori-i gate of a shrine located on the edge of Hyakkendana welcomed customers at the entrance, and many famous stores, moved from the stricken areas, lined along the both side of the main streets. Soon after its birth, Hyakkendana became one of the most popular shopping destinations, and it was always filled with a crowd.

Today, most of the famous shops already left, but instead many cafes and small restaurants joined Hyakkendana. Even though the district does not show its past prosperity, it still functions as the outside shopping streets with the tori-i gate. 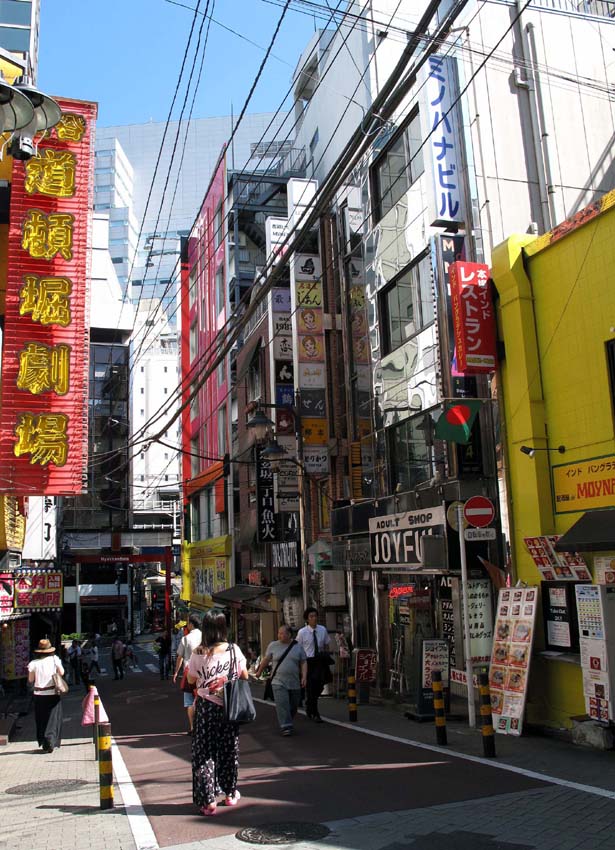 In the print, Maekawa shows the prosperity of Hyakkendana at the time by drawing people in shades. By contrasting the amount of dark shades in the bottom half of the print and in the vacant sky of the top half, he succeeds to express the density of people. Painting from children to adults, and both who wears Japanese kimono, and western clothes, Maekawa expresses Shibuya Hyakkendana as a symbol of hope. His print demonstrates not only the serene lives that people recovered, but also the development of Tokyo that citizens newly acquired after the disaster and its reconstruction. 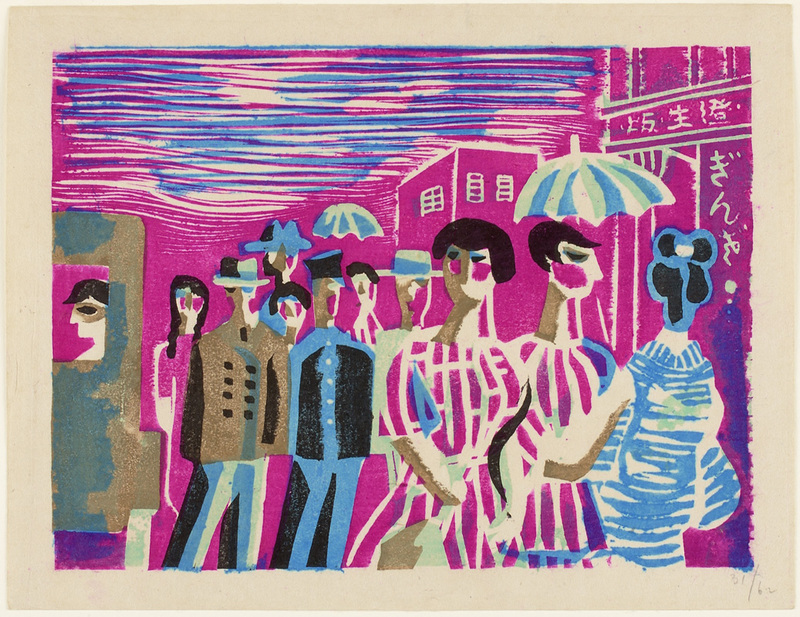 In contrast to Shibuya, Ginza experienced much greater devastation. Most of the Ginza area was burnt out, and Ginza once became vacant lot. However, after the earthquake, many high-class department stores and quality shops came back to Ginza. As a result, Ginza reestablished its identity as high-class shopping district, that is passed to today. 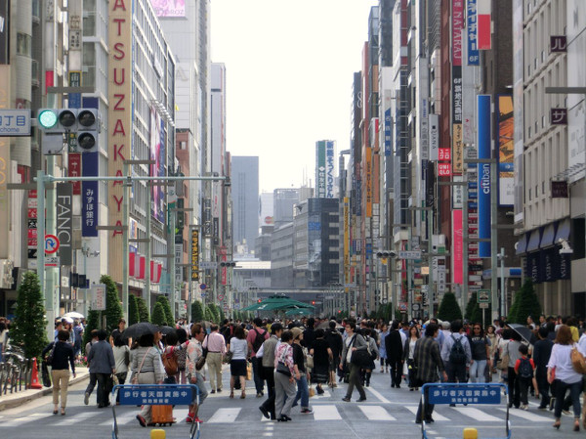 Although the purpose of this print, showing people are enjoying peaceful lives they regained after the devastation, is similar to that of Shibuya print, in the print of Ginza, Kawakami Sumio puts more emphasis on painting people. He draws this print from a pedestrian viewpoint, and he shows the popularity of Ginza by overlaying people on top of each other. In addition, the use of vivid colors such as pink and blue enables him to demonstrates the merry, festive atmosphere of Ginza due to its luxuriousness. 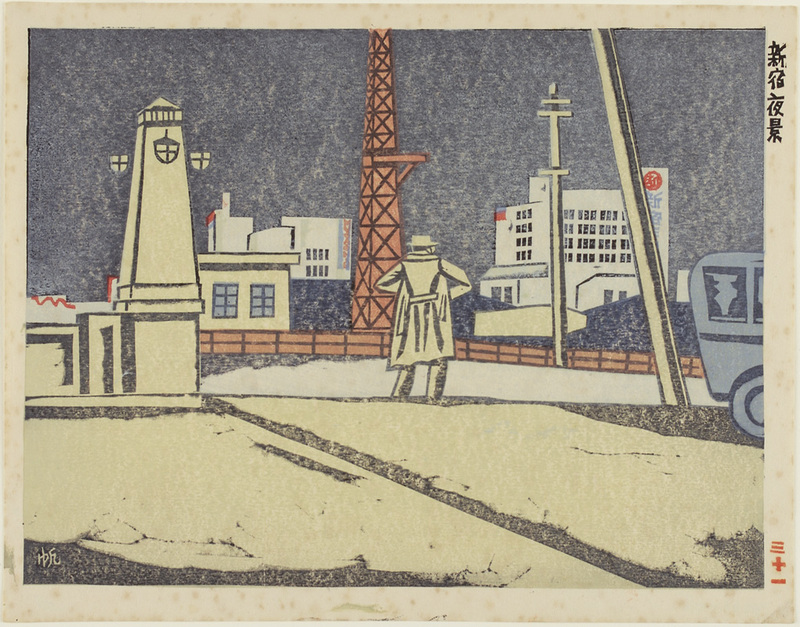 The Great Kanto Earthquake did not damage urban functions of Shinjuku. As a result, after the disaster, so many people moved to Shinjuku that the population of Shinjuku was tripled. The more people moved into Shinjuku, the more industries and more businesses also flowed in. Thus, Shinjuku became a highly urbanized downtown due to the reconstruction.

In Maekawa’s painting of Shinjuku, a man stands in the center conveys us the sorrow for the urbanization. Facing back to the audience, he stares at a newly built department store and a red iron poll on the opposite shore. The lamps, electric polls, and a car surrounding him are the indications of modernization. He might think back on Shinjuku scenery in the past, and mourn for the rapid industrialization and modernization.  His loneliness, the dark sky, and his coat, the sign of the cold weather, all enhance the pensive manner of the print. 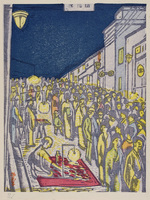 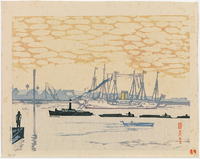 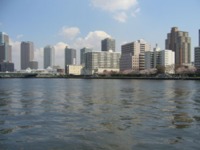 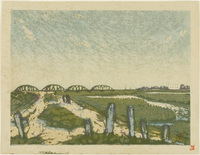 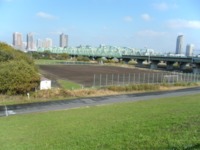 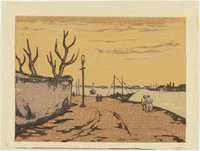