Connection to the Past

Connection to the Past

However, despite its name, One Hundred Views of New Tokyo holds not only new modern views of Tokyo, but also many prints that remind people of the good old days before the earthquake. From annual traditional events crowded with many people to quiet, natural spaces, the artists exhibit the Tokyo views that made people look back, and reflect the past of Tokyo, the city fluctuated by reconstruction and modernization.

Thus, confirming they have the connection to the old Tokyo through those prints of old views, people could apprehend the drastic change of their surrounding environments as “progress,” rather than “complete loss.” 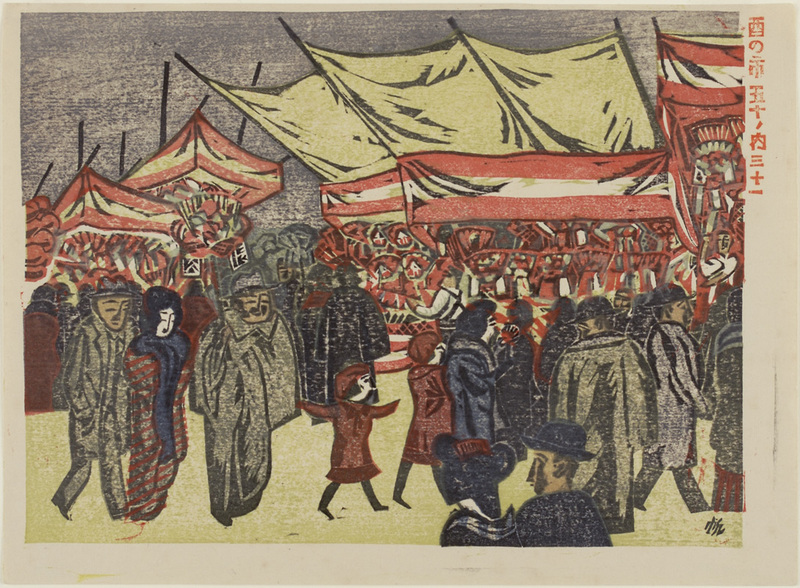 The Year-End Fair has been held annually in some shrines to pray for better luck and a thriving business since the Edo period, even in the year of the earthquake.

As in the print, in shrines, people bought Kumade-Mamori (rake-shaped amulets), wishing the prosperity of the following year.
Maekawa Senpan chose to print this festival because he regarded that as the essential part of the life of people in Tokyo. Especially for years after the earthquake, keeping tradition of praying to God might be important for people to feel they are protected by God, and have a hope for the future.
The Year-End Fair has been continued until today, and nowadays, it gathers more than 700 thousand people every year. 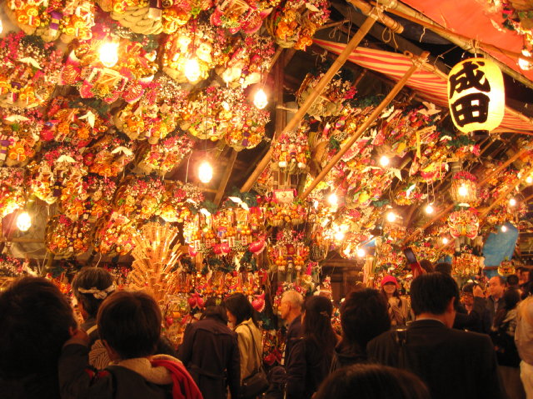 Even though this is the scene of the winter night, this print is bright and warm. The background is street stores of the famous Kumade-Mamori. The bright-colored canopies of those stores jut out into the sky, and made view in the print brighter.
In addition, Maekawa expresses the depth by drawing people in layers. That technique makes the bright space look bigger.

Although thick coats and scarfs people wear prove that this is the view of the cold winter night in the end of the year, from people’s warm smiles, we can see the sense of relief people feel after having the past year without troubles. 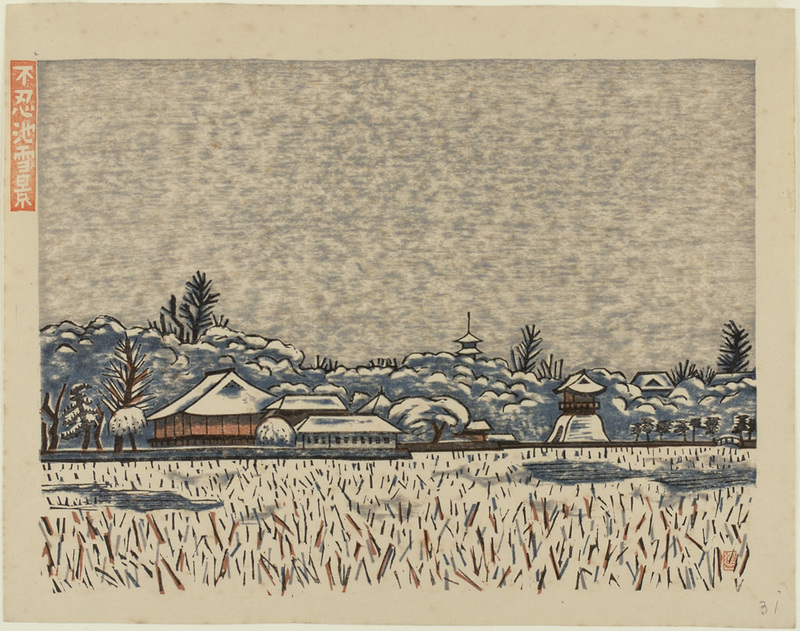 Shinobazu Pond is a natural pond that has existed throughout the history of Tokyo. Nowadays, the pond is located inside of the Ueno Park, and it is popular as a place to walk. Before the earthquake, in Taisho period, the pond was often chosen as the setting for novels such as The Wild Geese by Mori Ougai, published from 1911 to 1913, and Kokoro by Natsume Soseki in 1914. Also, Utagawa Hiroshige created the print of this pond in his One Hundred Famous Views of Edo. Thus, not only as one of the unchanged scenes of Tokyo that reminded people of the old days, but also as traditionally cultural important place, Hiratsuka printed Shinobazu Pond.

Hiratsuka’s print of Shinobazu Pond is inverse of many prints in One Hundred Views of New Tokyo that capture the scenes of Tokyo in transition. This print of Shinobazu Pond takes people back in time. Instead of brick or concrete tall buildings, the print is filled with Japanese elements such as wooden buildings and a five-story pagoda in the back.

In contrast to Utagawa Hiroshige’s print with beautiful flowers and many visitors, made in Edo era, Hiratsuka drew the snow scape without people.  In addition, Hiratsuka limited his color usage to three colors, white, gray and brown. He printed even trees and the sky in gray scale rather than green or blue. This coloring technique gives the print unpretentious atmosphere. Also, Hiratsuka printed the scene as gazing the pond and the opposite shore into the distance. Therefore, Japanese traditional elements, the absence of people, its sober colors, and the artist’s viewpoint all contribute to show this work as a person yearns for old Japanese views in solitude. 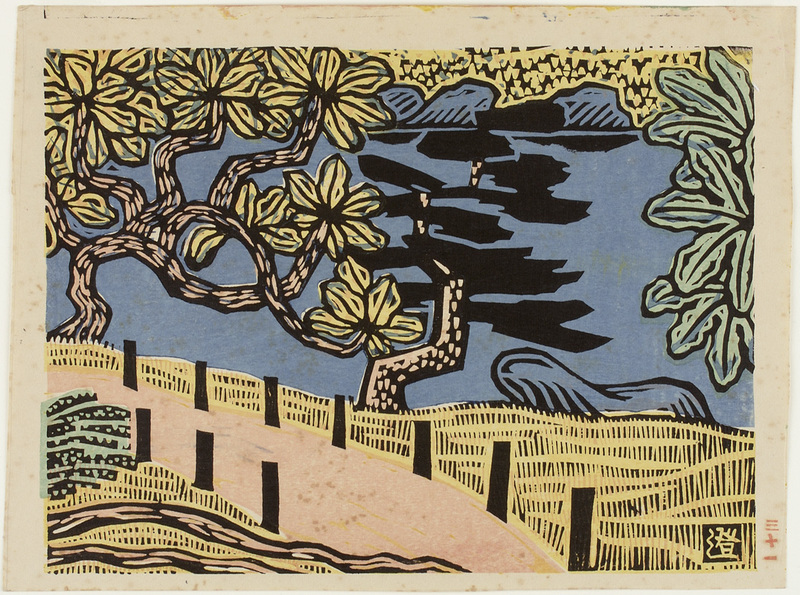 Hamarikyu was originally the garden of the branch of Edo castle. Drawing water from Tokyo Bay, Tokugawa shoguns and their families enjoyed the change of views caused by tides. During Edo era, Hamarikyu was to Edo shoguns what a theme park is to people today. They composed poems, enjoyed meals with music, and took a boat there. When Meiji period begun, Hamarikyu changed into a branch of the Imperial Palace, but today it is open to the public. Similar to Shinobazu Pond, Hamarikyu was the place which is deeply connected to Japanese tradition. 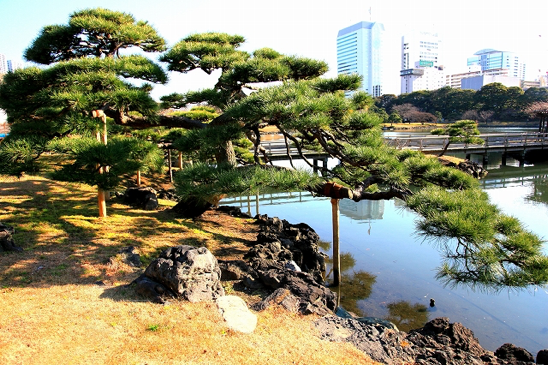 Kawakami draws a pine tree reflected on the water in the center of the print with powerful strokes. The fat trunk, the exuberance of foliage, and the black plain shades reflected on the water show the vitality of the pine tree.  Kawakami might try to convey that the connection to the old days of Tokyo was so powerful that it would not be eradicated even under the rapid modernization and urbanization occurred in Tokyo at the time. 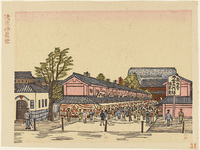 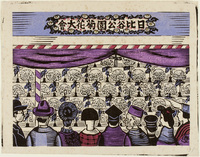 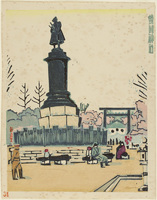 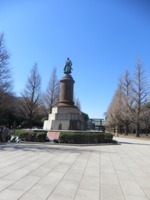 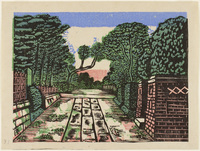 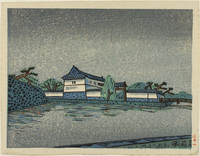 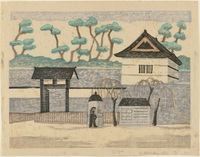 ← History
Bridge Over Time →
Connection to the Past