Planners and architects in Japan believed the Great Kanto Earthquake was
“a once-in-a-lifetime opportunity existed to build the city of the future.”

Since Meiji era, Japanese government aimed to gain international recognition as an industrialized, modernized country, but this aim had often been challenged by political objections and financial limitations from inside of the country.

However, the Kanto Great Earthquake cleared away the old Tokyo, and enabled “the state to use its power and influence to achieve lasting social, political, educational, and economic objectives.”  The earthquake removed many structures of Tokyo, and prepared it to transform into the “high modern city”. Considering the disaster as the golden opportunity, Goto Shimpei, the Home Minister, and many bureaucrats carried out “aggressive land readjustment, confiscation, and rezoning schemes in order to create large public spaces” .  Through the reconstruction policy, Tokyo adopted not only western technologies but also the Euro-American notion of urban life.

New Technology and entertainment are one of the most popular subjects of One Hundred Views of New Tokyo.  Drawn often with powerful lines and vivid colors, those prints show the audience the excitement and hope people held for the new coming western objects and ideas. From viewing the Tokyo scenes in those prints below, it is hard to tell that only 10 years had passed from the catastrophic disaster. Newly arrived technologies improved the living standards and people gained the space in their lives to entertain themselves. From those views, we can see the material and mental recovery of Tokyo. 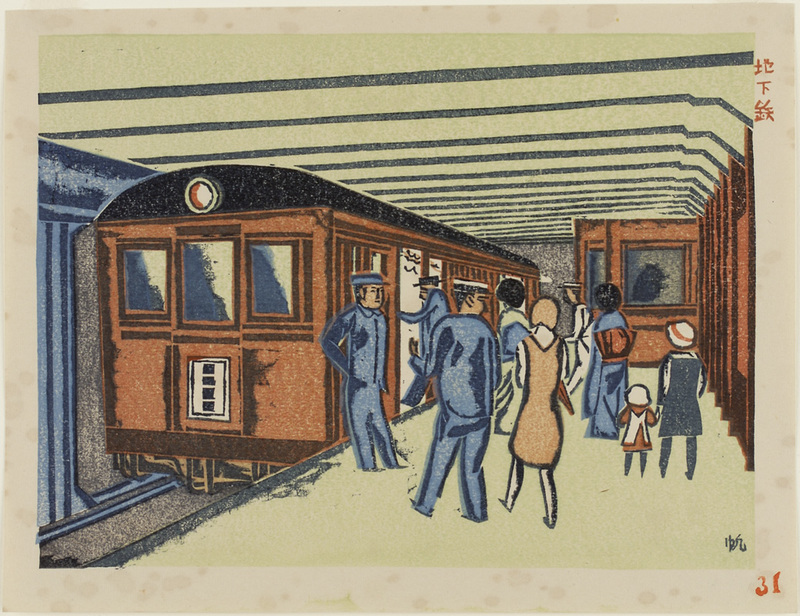 In 1927, Asia’s first subway opened in Tokyo between Ueno station and Asakusa Station (2.2 km).As the symbol of modernism, subway was so welcomed by people that more than 40 thousands of people rode it on the morning of the opening day.

Lacks of experience, technology and knowledge slowed down the construction of the first subway. Digging tunnels by hands from 1925, the subway finally completed in 1927. Despite its slow start, subways would spread rapidly and gradually replaced steam locomotives that ran on the land.

Today, subways are stretched around Tokyo as spider-web, and they are essential means of transportation.

Maekawa draws the scene that people are riding on a subway. Even though underground should have been dark and austere, this print conveys us the bright and cheerful atmosphere that reflects the emotion of people in the print who are going out.

The colors are limited to bright orange, the actual color of the subway at the time, and relatively light blue, the opposite color of the carriage’s orange, white, and little bit of black that is used to draw lines and shadows. This use of color makes the scene brighter.

In addition, the use of straight, bold lines is a characteristic of this print.

Traditionally, lines are the key elements of Japanese drawings and paintings. In this print, those lines effectively emphasize the hard and cold textures of metals, new industrial products. 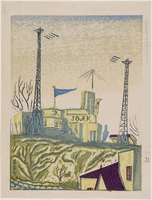 The first radio in Japan  was broadcasted from here in 1925. 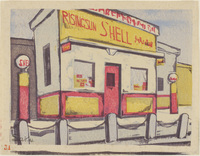 A gas station was new to Japan at the time. 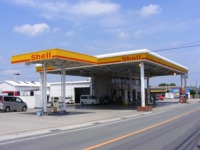 The garbage incinerator was relocated due to an environmental issue. 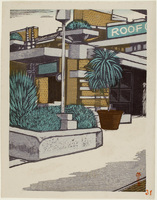 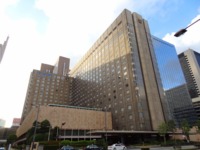 Because of the deterioration, the hotel was rebuilt in 1967.

As physical structures of Tokyo were getting recovered, people started to pursue their psychological recovery. After experiencing huge loss, people needed entertainment in their lives that enabled them to enjoy the unusual merry. Moreover, newly arrived Western entertainment practices reminded them of the progress of their city and their lives. 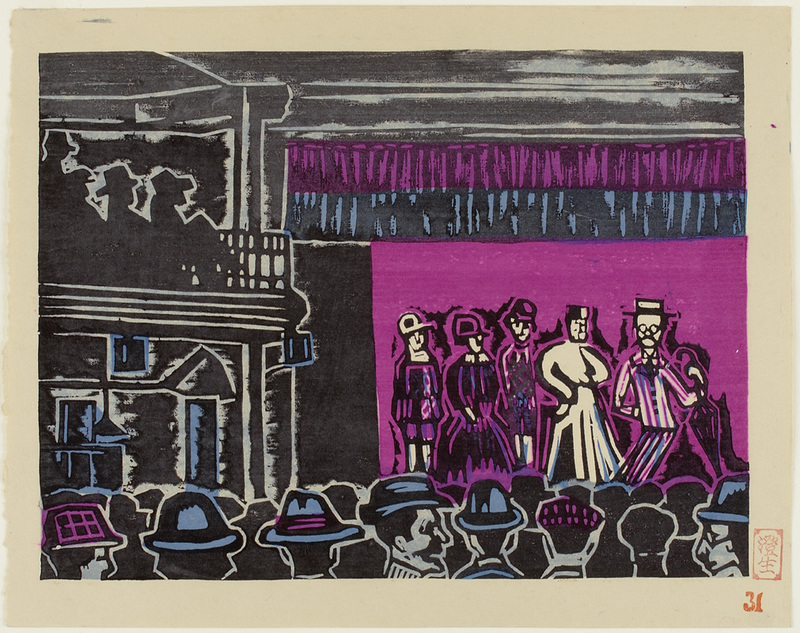 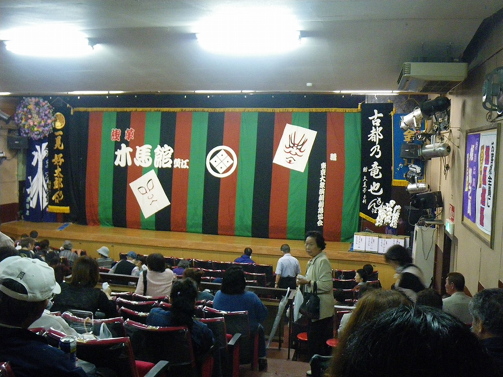 All prints that depicting entertainment scenes have people.However, among those prints, Kawakami Sumio’s Casino Follies stands out to the extent that Kawakami draws facial expressions of people in the prints. Especially, a smiling face of a man sitting in the center attracts the viewers’ attentions, and shows that people were enjoying the Casino Follies’s play. In addition, color usage plays an important role to emphasize the extraordinariness of the play the actors perform. While the audience is printed in black as they actually sit in the dark in a theater, the actors and the stage are printed in a vivid pink. This contrast of the use of colors, whether real and unreal underlines the oddity of the play, and effectively shows that the audience enjoyed the extraordinariness. 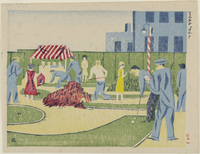 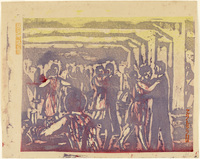 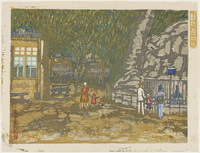 Early Autumn at the Zoo 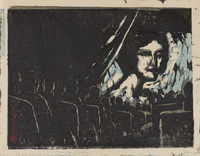 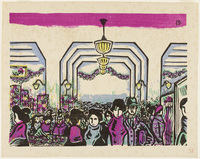 Inside the Department Store 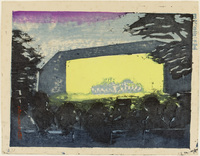 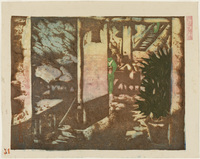