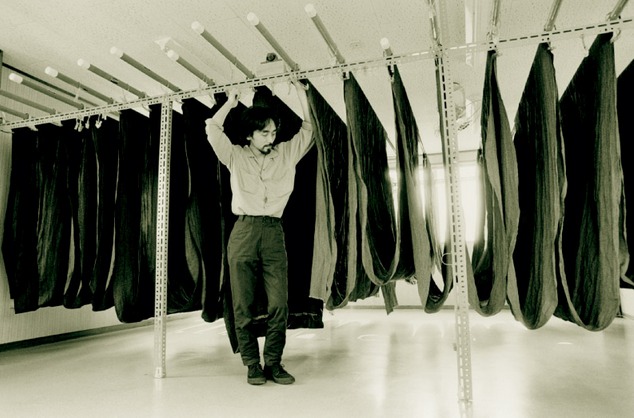 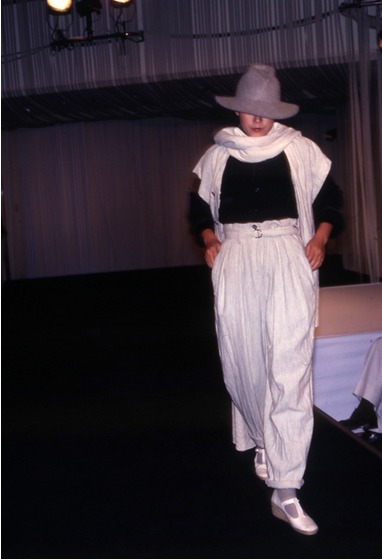 Yamamoto experimented with gender nonconformity and cross-dressing from his earliest collections, which showcased Japanese models in menswear, and started an international menswear trend for women.

Born in Tokyo in 1943, Yohji Yamamoto began his career studying first English, then law, and finally graduated from Bunka Fashion College with a fashion degree in 1969. After winning a contest, he spent nine months in Paris but was unable to garner interest in his designs.

Still a fashion icon today, Yamamoto began with his close collaborator Kawakubo by highlighting forms which were comfortable, loose fitting, easy to layer, and all inspired by the traditional Japanese kimono and yukata, although patterns and colors were left out of their work until the mid-80's. His initial reception in Paris, along with Kawakubo, was abysmal, and their shocking take on high fashion did not mesh well with establish fashion norms such as luxurious fabric, patterning, 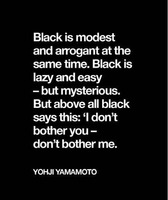 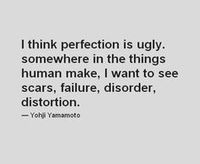 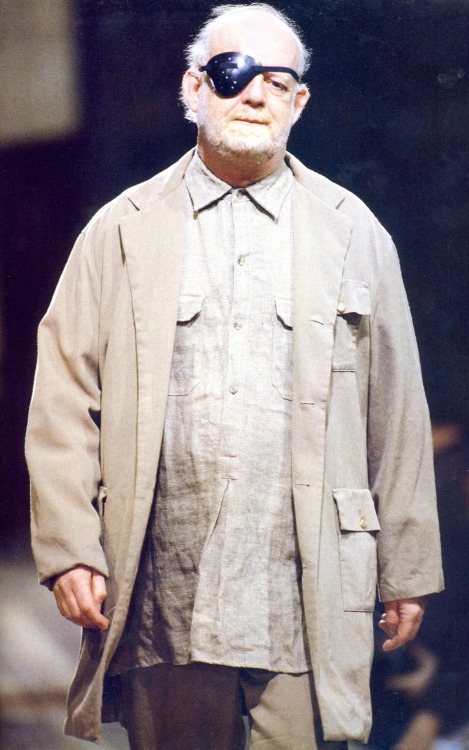 These early designs of Yamamoto's display his tendency to stick to one color sceme throughout his outfits, using minimal accessories as the venue for providing splashes of color and visual interest to otherwise monochromatic color schemes.  I chose the two outfits here as an example of his early use of accessories, which later evolved into something entirely different.  The eye patch (hand in hand with the age of the model) would not typically be displayed with the suit, and yet gives the overall look a pirate-y feel, evoking a completely different understanding from what otherwise might be perceived as a dull brown suit.

On the other hand, the suit on the female model is finished with a bright red pinafore, bringing feminine elements into what would otherwise be a dark and somber suit, similar to his earliest menswear-for-women collections as seen above in Item #68 (Original Y's Collection).  Thus, he continues to play with concepts of gender bending in the context of high fashion throughout his work, which can also be seen in the styling of the model (for instance, her hair is pulled back in such a way that it would not be immediately seen from the front). 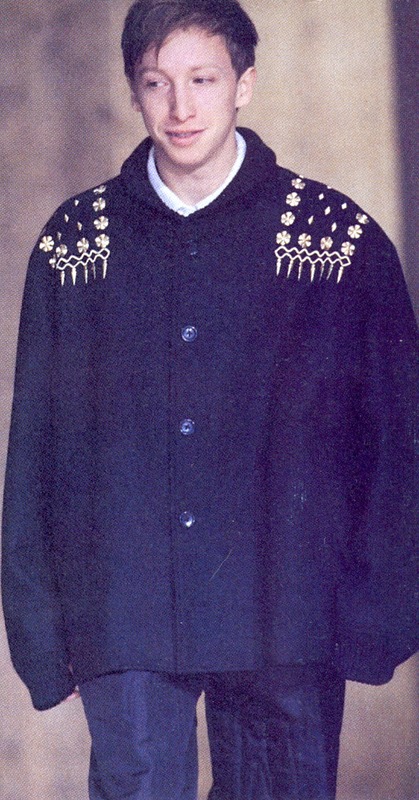 A second image from Yamamoto's menswear collection of '92, the same collection as the pirate suit above was from, sheds light on two more facets of Yamamoto's style and modes of display. Firstly, there is a stark contrast between the age of the models throughout his '92 collection, in which he used very young models and very old models to pose a stark contrast to the expectations of the audience.

Secondly, he uses the trend of oversized menswear throughout his '92 collection, which was very interesting.  As noted in discussions of earlier designers, oversized forms typically served the funciton of making a small model appear smaller, and something interesting about the combination of this with very young/very old models (all appearing very small due to their ages) is that it seems to question the very essence of masculinity, with regards to the stages of fragility that every human progresses through, regardless of gender.  Imposing a constant notion of masculinity throughout all stages of life could therefore be construed as a construct he attempts to destabilize with this collection.

It could also be argued, however, that the age differences between the models is also meant to be a moment of reflection on the temporal space the fashion industry occupies. The viewer is reminded of their own mortality and the speed with which the seasons change (especially in fashion), which is also a construct that Yamamoto and his contemporaries constantly sought to undermine, in favor of a more reusable and timeless approach.