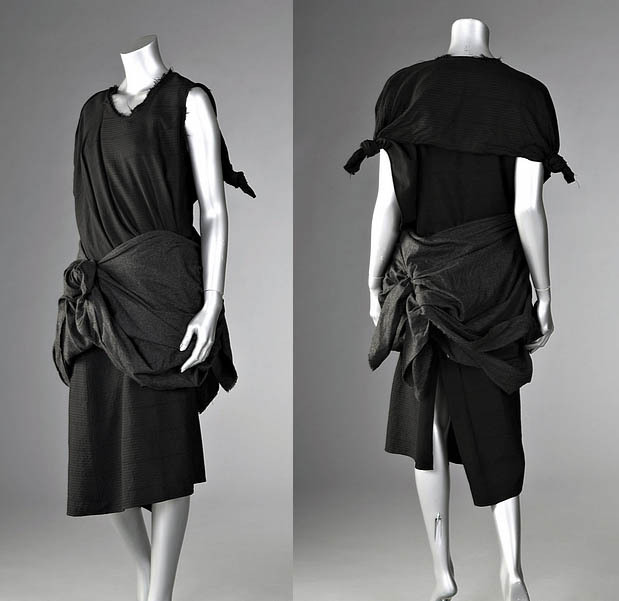 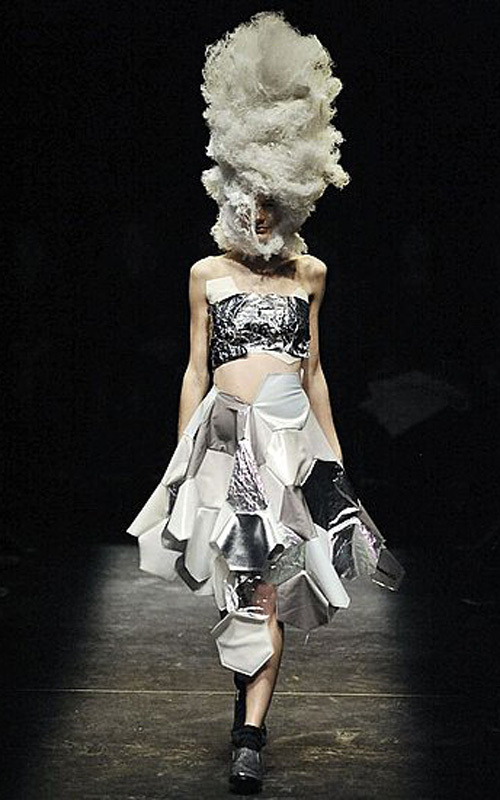 In her evolution as an artist, Kawakubo focused on integrating new materials and forms, sticking to the basic ideals of Japanese fashion she had helped to found. Slowly, they drifted away from all black,  as shown above, but without falling back on ostentatious use of color.

As the only female founder, Rei Kawakubo contributed her understandings of growing up in postwar Japan with deconstructed outfits meant to appear poor or like street fashion, and yet proudly flaunted her beggardly collections in Paris, along with Yohji Yamamoto, who was a frequent collaborator with Kawakubo. There was an initial uproar over the appearance of her collections; they clearly questioned the efficacy of capitalism, the notion that it had to be high class to be high fashion, and the overall inseperability of money and clothing.  Her line, Commes des Garcons, is still going strong in Japan today. 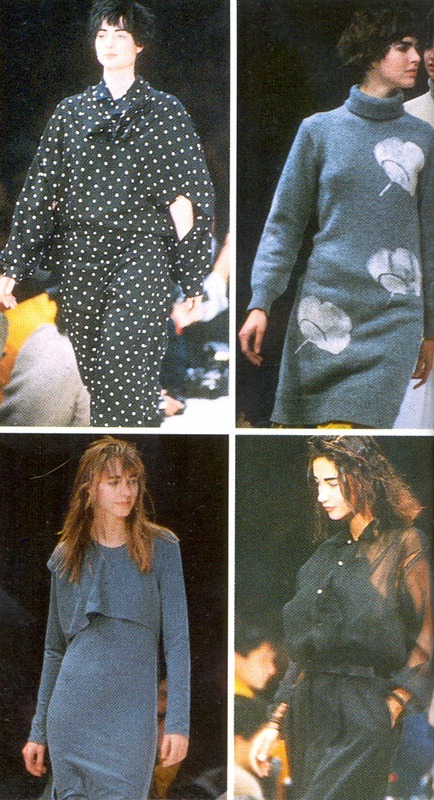 Kawakubo's Comme des Garcons collection of 1985 embraced covering the female form in its entirety, from neck to writsts.  This collection made an effort to reject contemporary high fashion and haute couture while imposing a bit of a feminist edge at the same time.  It is also emblematic of the way that Japanese fashion designers on the whole, tend to err on the side of the conservative, and take the opposite approach to the global West in terms of sexualising the models. 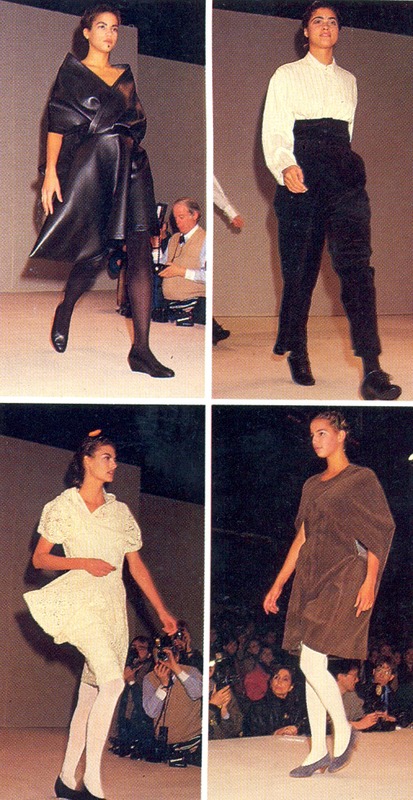 In her 1987 collection, Kawakubo returned to the basics by working primarily in black and white, but also departed from the basics by making draped dresses in ingenuitive fabrics, such as the leather dress (pictured at the top left), and the suede dress (pictured bottom right).  She also continued trends started by Yamamoto, and was influence by some of his 1977 menswear for women (pictured on the home screen, as well as on Yamamoto's personal page - high waisted menswear for women pictured top right). Her design on the top right is especially interesting as it is essentially an inversion of Yamamoto's design. 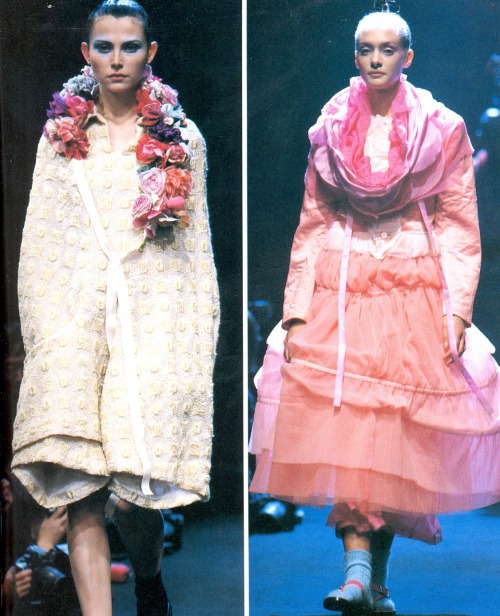 In 1992, Kawakubo used flowers as the influence her collection, but beyond incorporating flowers themselves into all of her designs, she also emphasized the shapes of flowers and created unique ways in which we might wear them. Still, most designs maintained a monochrome composure, although she broke away from black (and a greyscale color palette) in a meaningful way. 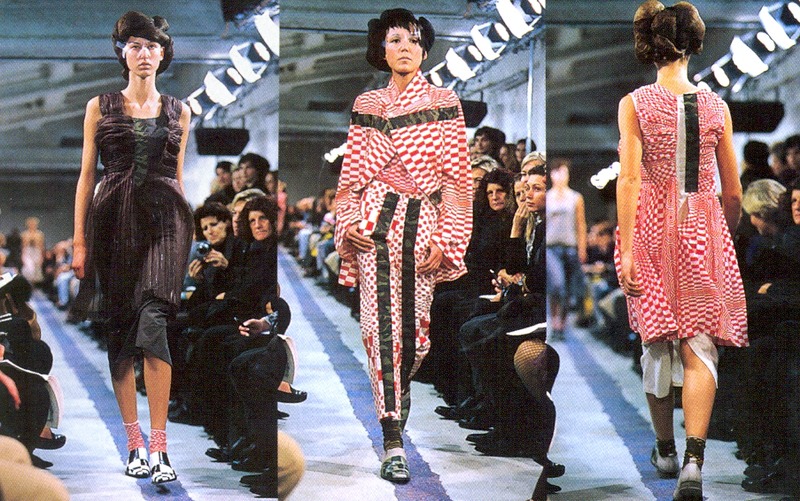 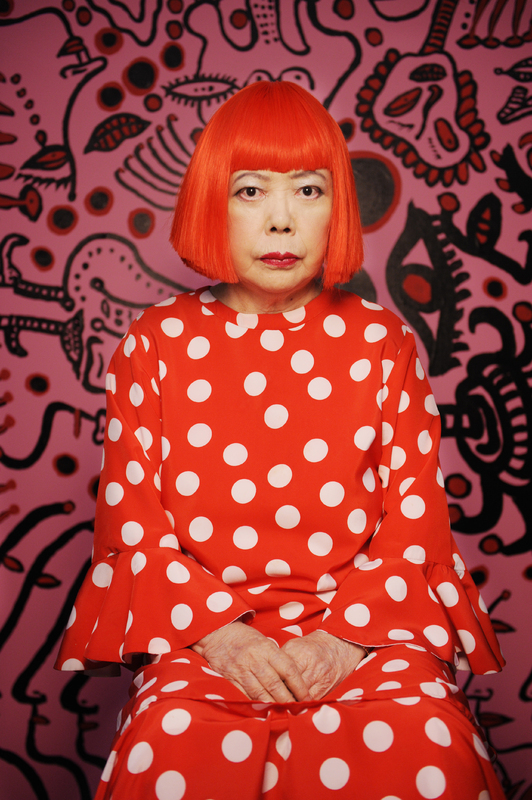 The influence of art

As stated in my visual essay, fashion does not take place in a vacuum.  Culture are fashion tend to be closely interwoven in both themes and appearances, and play off of one another to make each other stronger.  In the example flush right, I noticed a design of Kawakubo's that reminded me forcibly of the work of Yayoi Kusama, who works primarily in red and white dots (although the Kawakubo design is made of red and white squares).  Interestingly, the top-middle design is also draped remarkably similarly to a kimono, which Kusama also uses in her work.  Perhaps this was Kawakubo's way of giving a nod to Kusama's work.