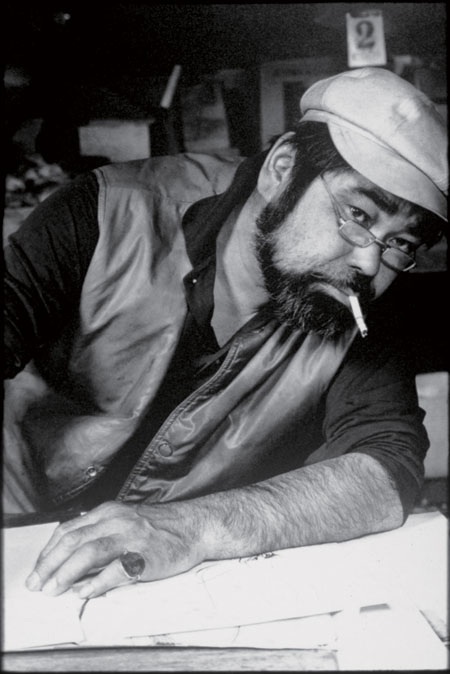 Bikky Sunazawa was an Ainu artist who mainly focused on woodcarvings. His works were inspired by a number of influences, such as Western abstract artists, Native Canadian art, and his own identity.

Sunazawa was born in 1931, Hokkaido between Koa-Kanno, an Ainu man who carved tourism sculptures and was a leader of many Ainu activist movements, and Peramonkoro, an Ainu mother who was a skilled embroiderer who also was the leader of the Young Ainu Women’s Association. Sunazawa’s parents were not only traditional artists, but also activists for rights of Ainu people. They knew the foreshadowings of their fate of living under the Japanese government, and they raised their children to adapt to the Japanese ways while still holding onto their Ainu identity. Peramonkoro taught Sunazawa how to sew and embroider despite the gender barriers, as women in the family were mainly responsible for those tasks. In the future, this influenced Sunazawa to incorporate the patterns he learned into his wooden jewelry for tourism.

Sunazawa decided to become a sculptor because he believed an artist who simply painted was not challenging enough for him, and he wanted to be physically involved with work. Osip Zadkine, a cubist tone artist, and Shigeru Ueki, founder of Modern Art Association and a member of the Abstract Art Club who made simply sculptures from wood to deal with the fundamental nature of wood were some of his early influences.

Sunazawa goes to Tokyo, but comes back to Hokkaido where he became an active participant of Ainu activism for a while. Although Sunazawa didn’t approve of being in activist associations because he believed it would keep the Ainu in a narrow mindset where they are only victims of discrimination, he participated in movements when a statue by a Japanese artist was erected, depicting the Japanese as pioneers of Hokkaido while an Ainu man knelt at their feet. Around this time, Sunazawa disliked being referred to as an Ainu sculptor because he did not want to be treated differently for his heritage.

In 1983, Sunazawa was offered a cultural exchange scholarship to Canada to experience indigenous Canadian woodcarving. He was both surprised and amazed at how much recognition the traditional artists of Canada receive from the society, which was not the case with the Ainu. He learned the way indigenous Canadian artists carve and returns to Hokkaido hoping that the Ainu could have self-respect and be respected by the people and the government of Japan and by the art communities around the world.

Sunazawa’s final years involved him battling cancer and working on Ainu themed projects until his death in 1989. His last projects were mainly abstract wooden works, where he used the natural characteristics of wood, whether it was dying or had a rough surface. He saw himself as a “Northern King” who would reconstruct and revive the trees to give them a new life in his northern kingdom, as his experiences in Canada made him recognize the importance of northern peoples' adaplabiloty to the harsh climate while striving to sustain their culture.

Sunazawa passed away on January 25, 1989, with many books and articles written about him and his artwork, as he that was his wish in his lifetime. 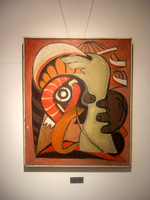 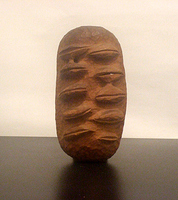 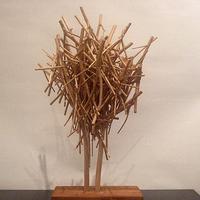 Ainu flag designed by Sunazawa (not in use anymore in the present).