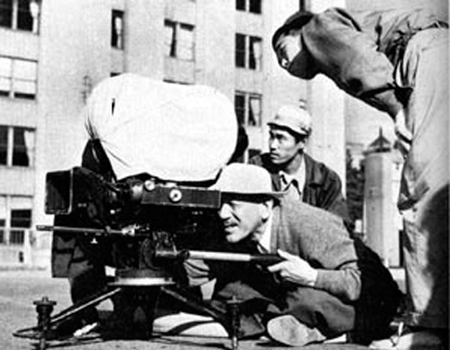 The stationary low-angle shot. Ozu shooting The Flavor of Green Tea over Rice, 1952.

Imagine the position of the camera in these shots.They seem like we tilt our heads up and look up to these characters. Donald Riche describes the position of the camera as if “a person sitting on the tatami matting of the Japanese room.”[1] Richie explains that this low camera position happened when Ozu made films about children.[2] Scholar Wen Jiang suggests that Ozu made fun of the origin of this low camera angle in an interview that he adopted this camera position because the convenience of low-angle shots.[3] It was unintentional for a Japanese to use a Japanese style of expression as Ozu inferred in his interview, but it creates an ambiguous imagery and relationship to his characters. 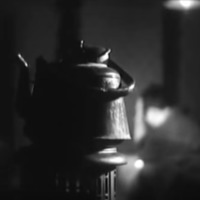 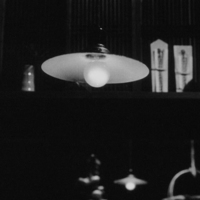 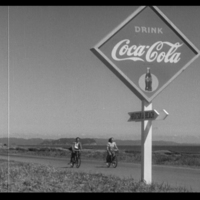 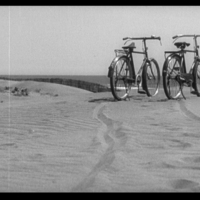 These film stills are so-called “pillow shots,” close-up on still-life objects inserted between consecutive shots. This term was used by Noël Burch to refer “a loose analogy to the Japanese pillow-words (Makurakotoba) of classical Japanese poetry.”[1] Pillow-words in Japanese poetry do not have specific meanings, rather they have metaphorical purpose in Japanese poems. Similarly, as Burch suggests, pillow shots are markers of Japaneseness in Ozu’s films. They went beyond a personal style of Ozu and become “a culturally and complexly determined sign of dissent from the world-view implicit in the Western mode.”[2] According to Burch, pillow shots often focus on a still object and last for around five seconds, which are unusual and uneasy for an “unpeople” shot. Unlike in Hollywood films, in which a camera guides us to identify with the movie characters, these pillow shots decenter the presence of people on screen.[3] Although they do not contribute to the narrative, they are subtle implications of a character or a set in the story. The lack of activeness and its complexity echo with the concept of “nothingness” (mu) inscribed on Ozu’s grave. These seemingly meaningless, dull and empty shots are quintessential features in Ozu’s films.

Game: what are these objects in Ozu's camera?