The Boardwalk and the Midway: Appropriative Entertainment in Atlantic City 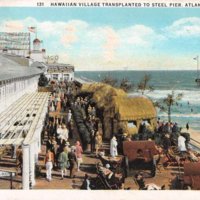 From the late nineteenth to mid-twentieth century, Atlantic City, New Jersey was the United States’ premier oceanfront resort. Known the world over for its Boardwalk, which was designed to attract respectable, white middle class visitors, Atlantic City also featured a rich, predominantly African American subculture that existed outside of the opulent beachfront hotels, homes, and stores.

Investigation of primary source artifacts and images from the Atlantic City Boardwalk and the cultural and ethnic enclave that historian Bryant Simon refers to as “the Midway” reveals the degree to which the resort relied upon and was constructed by its dual perception as a respectable and exotic destination. Often enacted through the appropriation of minority populations and cultures, Boardwalk and Midway entertainments, as with other resorts around the country, “provided implicit reassurances of a stable racial hierarchy for white tourists”[1] and support the argument that popular leisure spaces reproduced artificial sociocultural structures. This line of inquiry also probes new questions about the (re)production and consumption of culture and morality as well as cultural sites’ capacity to facilitate progressive community interaction.

[1] Henry Knight, “A Climate for Health and Wealth: The Lure of Tropical Leisure on American Soil,” in Tropic of Hopes: California, Florida, and the Selling of American Paradise, 1869-1929, (Gainesville: University Press of Florida, 2013), 77.