An Infantile Contradiction: Differing Displays of Children of Different Races at the 1909 Alaska-Yukon-Pacific Exposition 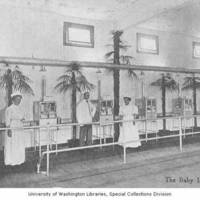 One of the stranger scientific trends at the turn of the twentieth century was the exhibition of human beings. Familiar to many are the tragic tales of native peoples exhibited as curiosities; less known, perhaps, is the display of young infants to showcase new technologies. Both of these were on display at the 1909 Alaska-Yukon-Pacific Exposition in Seattle, WA, as white babies and "Eskimo" babies alike were put on display for the enjoyment and education of the visitors. However, the discrepancy between their exhibitions reveals the racist and imperialist cultural convictions of the day.