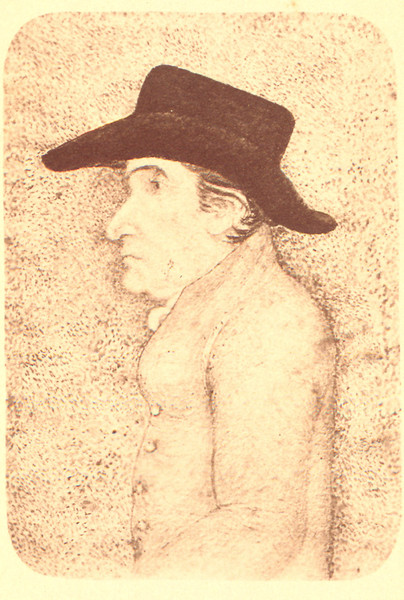 This exhibit is made up of important and representative passages from the journals, letters, and memoirs of Thomas Scattergood (1748-1814). Some entries are unique in their content and the sentiments they convey, but more often they present examples of formulaic expressions, allowing for changes in the sentence structures, grammar and context, but overall conveying the identity of a man lost in his spiritual uncertainty and accepting the guidance of his Inner Light. Trained as a tanner, Scattergood forsook his lay profesion and became a prominent Quaker minister, travelling often to guide fellow Friends in spiritual matters. In 1793, Scattergood felt an opening, or spiritual prompting, to go overseas and minister in England. Though his stay lasted over six years, it is unclear if Scattergood ever really felt satisfied the prompting, that is following his religious leading, to go abroad in the first place.

Thomas Scattergood became a celebrated historical figure in the Quaker community and influenced several social movements such as children’s education, prison reform, and moral treatment of the mentally ill. For instance, he is recognized as the founder of Friends Hospital, one of the United States’ first mental hospitals to practice moral treatment. He is celebrated for his sympathy towards the vulnerable and afflicted, perhaps partly due to his own inner sufferings and struggles so vividly recorded in journals and letters.

This exhibit is divided into four overlapping communicative modes in which Thomas Scattergood constructed, edited, and reaffirmed his spiritual identity while in England––and one that was later adapted and circulated amongst Quakers after his death. These modes are divided as follows: his journals, letters, biblical language, and dreams. The writing in his journals is constituted by the ways in which Scattergood represented his thoughts to himself, God, and to some degree the Quaker community, as traveling mnisters were encouraged by the Society to keep journals so that they could be used as guides for other members of the community (Crabtree 18). The second category, letters, represents the network and interconnectedness of the Society of Friends during this time, in which friendships, shared faith, and familial relationships transcended geographical separation. Scattergood’s letters also provide the reader with an image of Scattergood as a friend, father, and husband. Overlapping each of these categories is the biblical language that is ubiquitous throughout Quaker writing. Biblical rhetoric is present in both direct quotes and more subtle references in Scattergood’s letters and journals, serving to both structure and layer his speech with additional meaning. Finally, his journals also record a few of his dreams, which for the Quaker community represented divine communication and today is regarded as the language of the subconscious. While Scattergood does not have many dreams on record, these dreams would have been used to guide him just as leadings were and would have been shared with his community as well.