Nikolai Cathedral is the popular name for the headquarters of the Japanese Orthodox Church, constructed in 1891 in the Kanda district. The dome was badly damaged in the earthquake but was rebuilt by 1929. The cathedral was one of the meisho of the modern city. Today it is obscured by high-rise buildings. In a somewhat imaginative composition, Fukazawa depicts it from the east, along with the new concrete bridges over the Kanda River. The train in the foreground is on the Yamanote Line, the loop line around the city, which became fully operational in 1925. 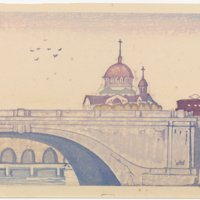